PTH in the News 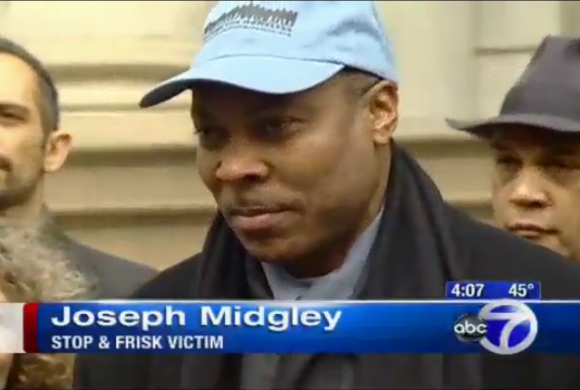 Here are some highlights from recent press coverage of our work, as well as a decade’s worth of archives.

Advocates for homeless people filed a complaint with New York City’s Civil Rights Commission on Thursday accusing the Police Department of targeting people living on the street, a practice they say violates a two-year-old law that prohibits “bias-based profiling.”

“They [cops] were constantly coming and telling us to move along,” he said. “They’re just treating us like nobody, like we’re nothing. It was horrible.”

Park, who suffers from arthritis, said, “I have a handicap and I couldn’t even sit down for a couple of minutes and rest.”

A spokeswoman for the mayor said the city is reviewing the complaint.

“The City respects the rights of our homeless New Yorkers and has put in place a new comprehensive plan to reduce homelessness,” said Monica Klein.

Gothamist: NYPD Accused Of Shuffling Homeless People Around The City Without Legal Justification

Police officers order homeless men and women to “move along” from city parks and sidewalks on a daily basis, in violation of a city law that prohibits profiling based on housing status, according to a complaint filed today against the city by the New York Civil Liberties Union on behalf of the advocacy group Picture The Homeless.

“They’re always telling us to move down the block,” said Jazmin Berges, 32, a formerly-homeless PTH organizer. “It’s different when you’re a person in a three piece suit and you’re sitting in a park. If there’s a group nearby with carts and handbags, they’re targeted.”

When a traditional arrest can’t be justified, many homeless men and women say they are threatened with trips to a hospital or psychiatric ward in handcuffs. The NYPD has also been known to confiscate and crush personal property.

“Over the past two years and especially the past several months, a number of documented incidents and reports, together with pronouncements by top government officials, raise serious concerns about whether homeless people in the city are being targeted with abusive and discriminatory treatment by the NYPD — simply due to their housing status,” they wrote.

New York Post: “Homeless men sue city for kicking them off the streets”

Three homeless men are suing the city for rousting them from a street encampment this year, saying they are owed $1,515 for lost personal possessions — and an unspecified amount for the emotional trauma.

“I’m praying to God because I don’t believe in Mayor de Blasio,” said Jesus Morales, 42, who has lived on the street since 1999.

“Homelessness is a tragedy, not a crime,” said NYCLU executive director Donna Lieberman. The de Blasio administration has no right to treat their possessions “like garbage,” she added.

Pix11 Morning News: “Do the homeless have a case in lawsuit against NYC?” [VIDEO]

Just days after Mayor de Blasio announced the city’s new HOME-STATE program to help the homeless, three homeless men filed claim against the city for harassment, after being told to move and having important items thrown away. Attorney Deborah Blum, executive director of the NYCLU, Donna Lieberman and Picture The Homeless representative William Burnett talk more about the case.

Mr. Parks, a member of Picture the Homeless, an advocacy group, said that the mayor kept rolling out initiatives, but that he had not seen results. “I hear about $25 million for this, $20 million for something else,” Mr. Parks said. “Where is it?”

“The Mayor and the police commissioner are trying to show people they’re doing something, to get the public off the back, but there’s nothing to it … except more surveillance and more police targeting homeless African-Americans and Hispanics,” [PTH member Floyd] Parks charged. “We need housing. It’s really simple.”

“Picture the Homeless says 125th Street has been the epicenter for abusive policing, with aggressive “sweeps” of homeless people occurring up to three times a day, and cops telling homeless people they’re acting under orders from the mayor.”

“They’re running us back and forth… And now what? You can’t make us disappear,” said Christopher Parker, who has been homeless for several years.

“Cops have always messed with us, but in the past month it’s gotten really bad,” said a homeless veteran named Sarge in a statement released Wednesday by Picture the Homeless.”

“They may not have roofs, beds or running water — but that didn’t stop a group of angry homeless people from waging a high-tech hashtag war against Mayor Bill de Blasio. The vagrants launched their unlikely cyberattack Wednesday, as they protested the mayor’s homeless policies with signs urging people to “Tweet @billdeblasio” using “#handsoffthehomeless.””

Chanting “hands off the homeless” in the frequent gathering spot for indigent individuals, the demonstrators alleged Mr. de Blasio has allowed and even encouraged the NYPD to badger and intimidate people living on the street. Several said the treatment has gotten worse in recent weeks, after Mr. de Blasio has vowed to clear the 80 encampments around the city—a pledge the demonstrators said was a betrayal of the progressive principles he campaigned on in 2013.

“… The general approach seems to be geared toward promoting gentrification in the central corridor of East Harlem, rather than solving the problems of the homeless, residents of the community or those coming to the neighborhood for treatment.”

“”Bratton doesn’t have a very good history on [homelessness],” said William Burnett, a self-identified Roman Catholic and organizer with Harlem-based nonprofit Picture the Homeless. “But hopefully he has a good grasp of what the Holy See hopes to do during his visit.””

Opinion piece by PTH board member William S. Burnett. “If you want to solve homelessness, there’s an easy way to do it: ask homeless people themselves! More often than not policies are created without input from homeless people, and as a result they are ineffective and wasteful.

“I’m protesting because I’m a person of color, and I don’t appreciate the way people behind the scenes get to pick and choose when and how I have rights,” added Picture the Homeless member Darlene Bryant.

By PTH members Jean Rice & Marcus Moore. “The de Blasio administration made good initial steps last week in announcing programs to help homeless families leave shelters and move into their own apartments. But actions by the NYPD targeted at homeless and poor New Yorkers through its discriminatory “broken windows” policing are troubling, as they criminalize homelessness and poverty.”

For a full historical perspective on our work, here are some highlights of press coveage dating back to 2002!

Most of these are on websites we don’t control, so please report dead links to [email protected]