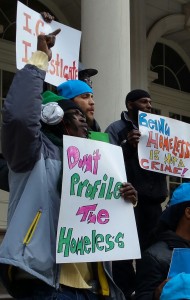 Today, along with our allies in Communities United for Police Reform – and over 50 local advocacy/community organizations and national homeless advocacy organizations – Picture the Homeless formally requested that NYPD Inspector General Philip Eure conduct an official investigation of the NYPD’s policing and treatment of homeless New Yorkers.

Read our letter requesting the investigation…

And check out some of the press coverage:

“We’re here today to tell the office of the Inspector General that he needs to look into how police are violating our rights,” said “Doc” of Picture the Homeless. “We met with him last spring to raise the issue, and it’s only gotten more urgent since then. I’ve watched the police throw my belongings into a garbage truck, my driver’s license and birth certificate and other things I’m having a hard time replacing. Officers are called on to remove homeless people who aren’t breaking any laws, but meanwhile the officers are the ones breaking the law. Back in the day the powers that be would let loose the dogs on us, but now they unleash their officers. They feel justified in using any kind of force on us. The NYPD is worse than any gang running these streets. It’s time for the office of the Inspector General to let the world know what we already know. Otherwise when will it stop? When will New Yorkers go back to being human beings? Someone needs to step up, and that’s what we’re doing.”

“There’s a growing body of evidence that the NYPD is engaged in a pattern of discriminatory policing focused on our homeless brothers and sisters,” said Michael Velarde of Communities united for Police Reform. “From unjustifiably removing people from public space, to destroying their property, to threatening to remove fare-paying passengers without homes from the subways, this behavior has intensified over the past several months. We believe this merits a full and thorough investigation by the office of the Inspector General, and we have a letter signed by over fifty organizations who join us in that call.”

“BYP100-NYC Chapter has signed on to this letter demanding that there be a formal investigation and review on the NYPD’s treatment of homeless New Yorkers,” said Delaine Powerful. “Being Black means that you are born into a system that attempts to disenfranchise you in every means possible. Because of a lack of access to reproductive, environmental, food, health, and economic stability, to name a few, many are unable to survive the violence and constant attacks against our mind, spirits, and bodies.  And so, many within our Black community end up homeless. And the very system that put them on the street tells them that they can’t be on the street, that they can’t exist in public spaces, that they can’t have the few items that they own, that the repercussions of a system failing them is to be handcuffed, beaten, kicked, fined, and arrested. 58% of NYC’s homeless shelter residents are Black. On 125th and Lexington, a few blocks from where I live, the cops have come down heavy, after stores like Banana Republic, Whole Foods Market, and Extell – a big developer who bought property on 125th and Lexington, arrived. To accommodate gentrification and the influx of white people and their money, policing has been intensified. So, not only are folks being displaced from their homes because housing is no longer affordable, and we have folks unable to purchase affordable foods because Whole Foods is expensive and the next best option, Pathmark, has closed, but they can’t live on their very own streets. Over 4 years ago the NYPD killed Yvonne McNeil – a Black lesbian, who was standing in front of her shelter. They shot her 14 times. And as we all hopefully know, stories like this aren’t anything new. Hypersurveillance, community policing, all these reformist strategies to try and fix how the police interact with homeless folk, with Black New Yorkers, will not mend the problem. You can’t fix a crooked & broken system.”

“I’ve been through every kind of abuse imaginable,” said Floyd Parks, a member of Picture the Homeless. “I’ve been called names, pushed around, abused, had my property destroyed. I feel like there’s a war going on. Cops look at us like we’re nobody. They think, I can do whatever I want to this person, because no one cares about them. But that’s not true. We’re people, and we’re part of communities. I’ve had everything taken from me, but I won’t stop fighting. Cops treat us like we’re the Jews and they’re the Germans, and the Inspector General needs to step up and have our backs to show the world what’s happening.”

“The Center for Constitutional Rights supports this call for an investigation by the NYPD inspector general,” said Nahal Zamani of CCR. “Being homeless is not a crime, but the NYPD’s wholesale campaign of systematically violating the rights of homeless people IS a crime. Shame on the NYPD. Their actions, which include illegally seizing and destroying the belongings of homeless people, clearly contravene the growing consensus from the federal government on down, that people without homes should not be subject to criminalization.” 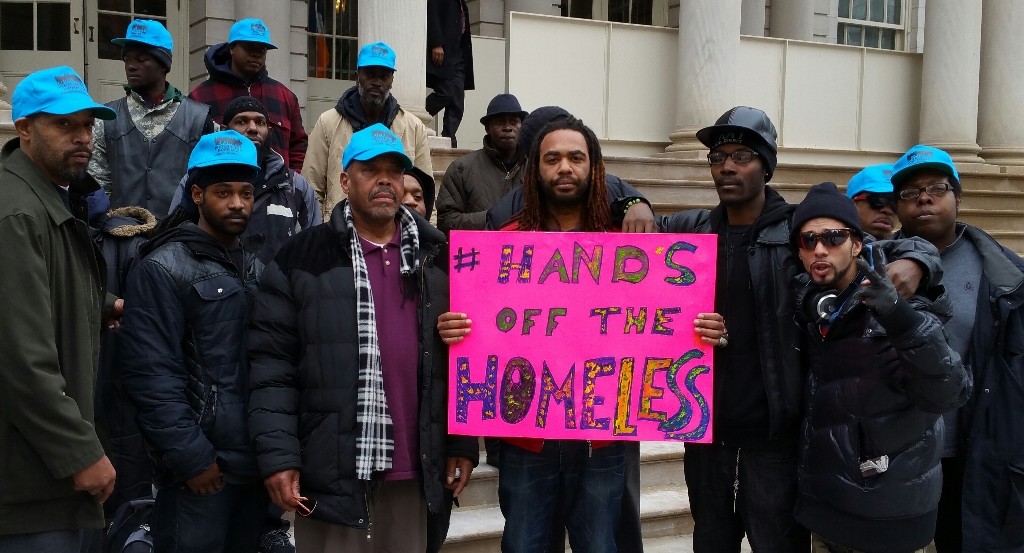 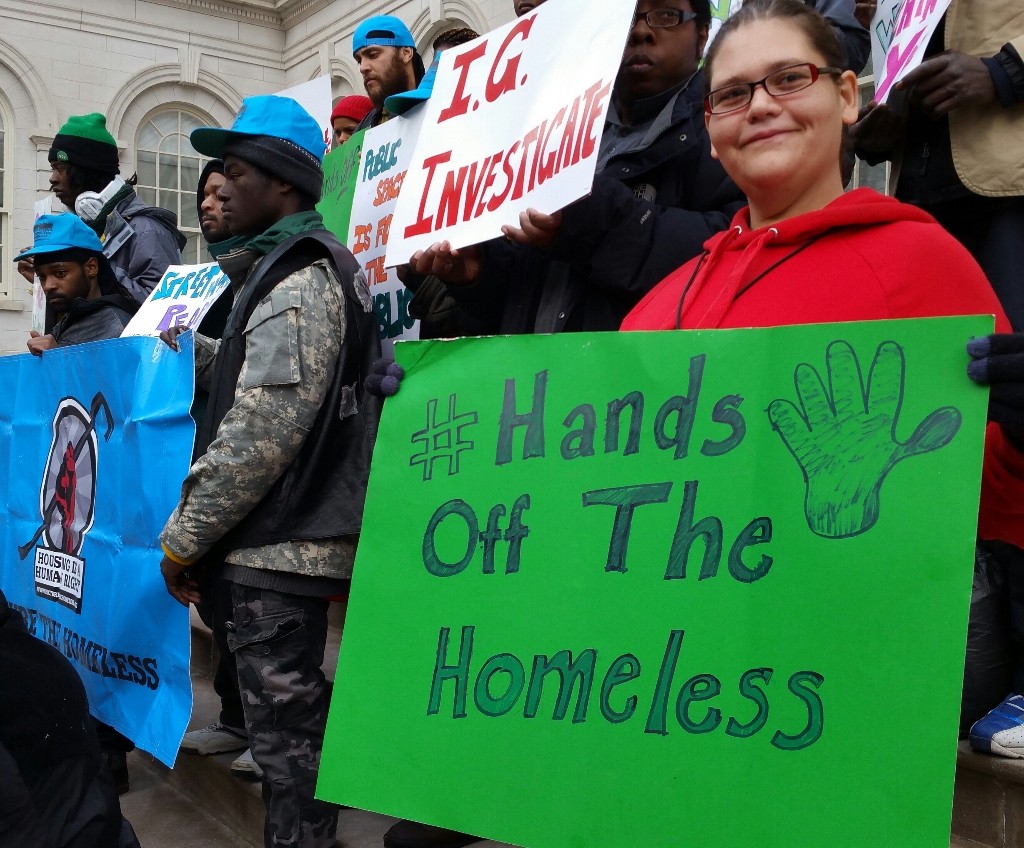 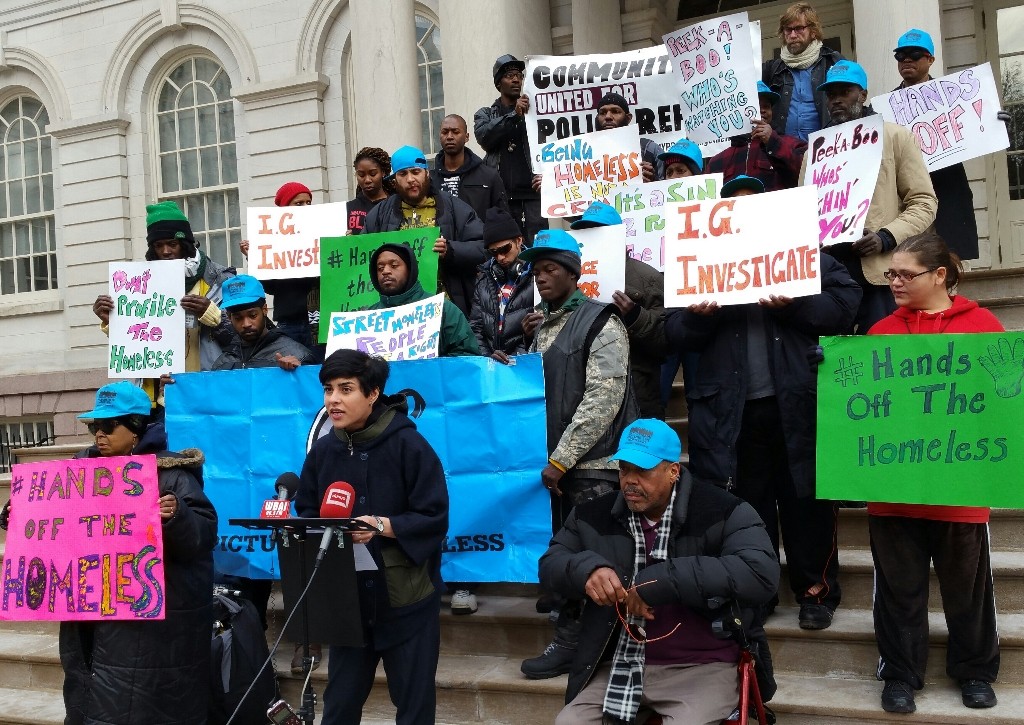 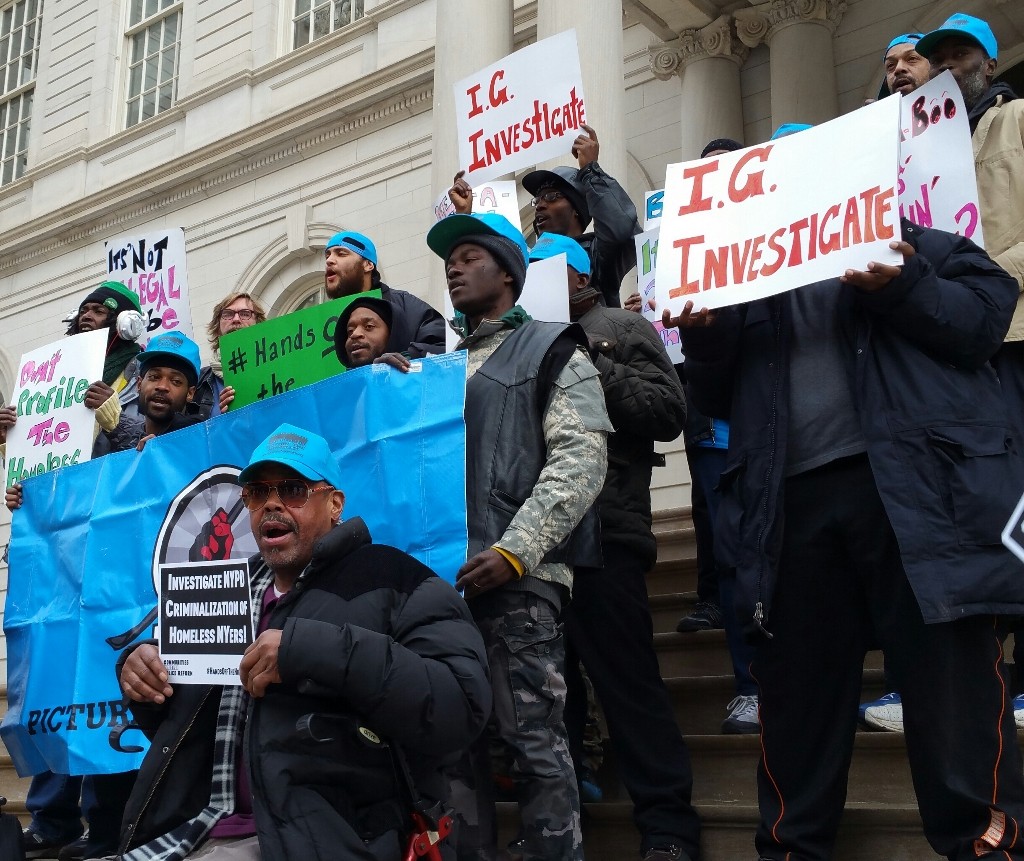