On September 15th, after over a decade advocating for legislation that would empower the city to conduct a count of vacant buildings and lots, Picture the Homeless was so proud and happy that the Housing Not Warehousing Act finally got a hearing before the New York City Council’s Housing & Buildings Committee! Our members and allies did a phenomenal job testifying as to why these bills are so urgently needed. 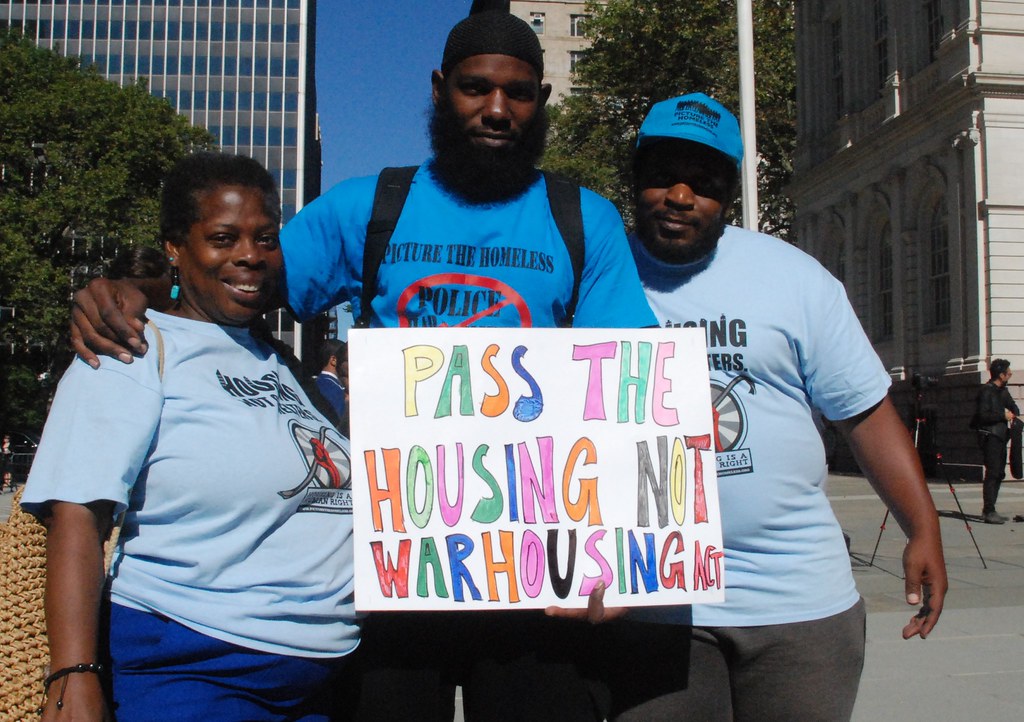 Advocates from Picture the Homeless, the Urban Justice Center and Gay Men’s Health Crisis held up signs and shouted chants such as “Housing’s what we’re fighting for, don’t let landlords shut the door!,” “Empty buildings don’t make sense, what we need are affordable rents!” and “Vacant buildings are a crime, landlords trying to make a dime!”

Committee Chairman Jumaane Williams, D-Brooklyn, and other council members questioned whether HPD was prepared for the hearing because the agency did not offer a detailed breakdown of the 670 vacant lots it controls. “How could you come to this hearing and not know the status of each and every one of these sites?” asked Councilman Barry Grodenchik, D-Queens.

Here are some highlights from the dynamic testimonies of Picture the Homeless members and supporters:

“There are so many vacant properties and vacant lots in New York City, that there should not be so many of us sitting in shelters,” said PTH member Jermain Abdullah. “Instead, money should be put towards permanent housing. And these bills will help hold landlords accountable for letting properties sit vacant. I see vacant properties all the time. It made me angry, because I’m sitting in the shelter and you have all these apartments not being used for anything. It makes me wonder—what kind of plan could you have that lets these apartments sit vacant while they are renting out the storefronts? These bills would be a step forward for possible low-income housing. I want to see something happen with these vacant lots and buildings; right now nothing is happening with them. I want to change my situation. I’m tired to sitting in the shelter, working two jobs, and still can’t afford housing. The more apartments that are put on the market, the more we can see a decrease in rent around the city.”

“This is exactly what we need for planning purposes,” said Council Member Helen Rosenthal, in response to claims by city officials that the bill was not necessary. And when representatives from the City’s department of Housing Preservation & Development claimed that they already count vacant properties – but could not provide any figures – bill sponsor and Housing & Buildings Committee Chair Jumaane Williams asked “If no one on the panel knows, who knows?” 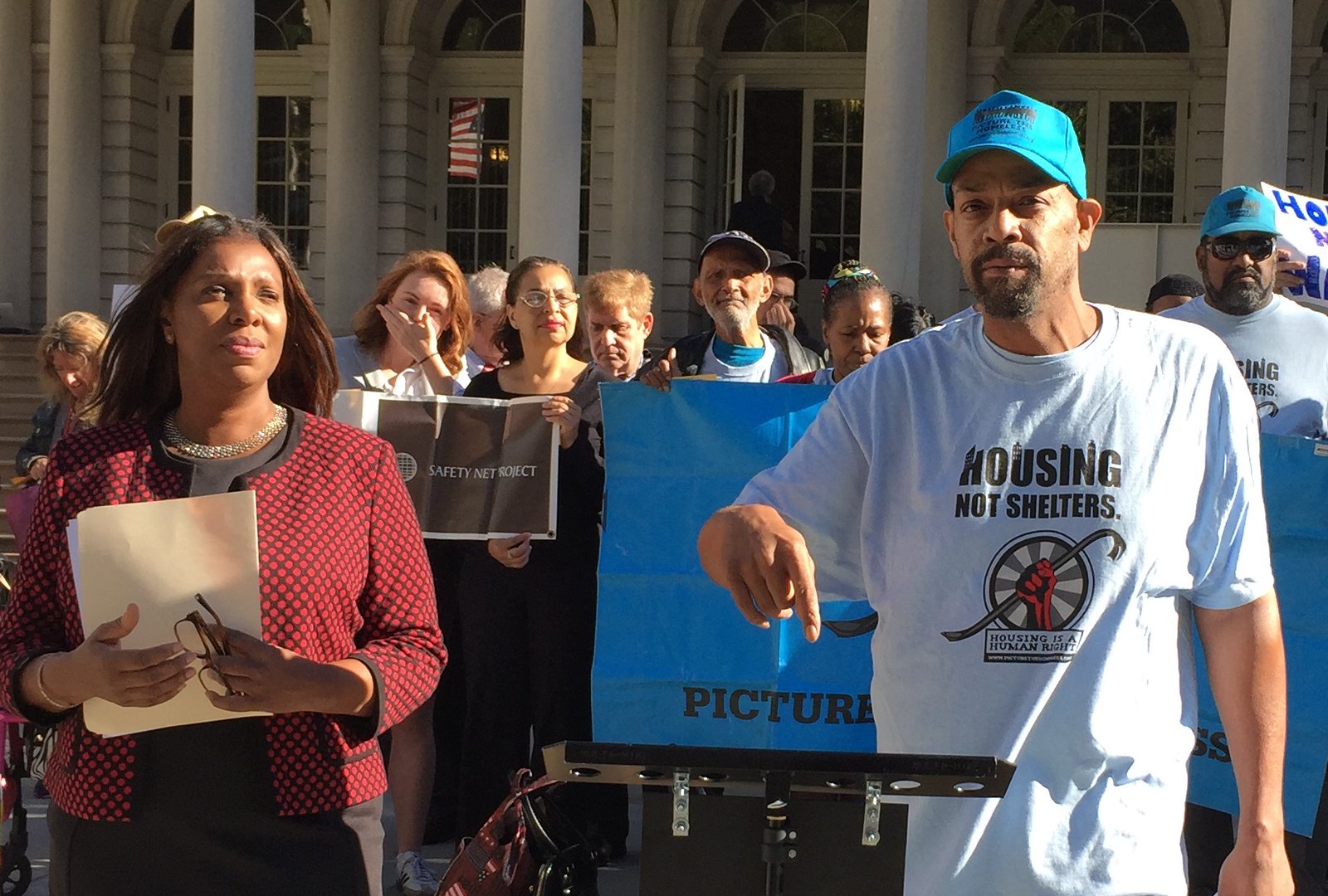 “In 2011, Picture the Homeless did a foot count of vacant units – counting both whole-building vacancies and vacant residential units above operating storefronts as “vacant buildings,”” said Manhattan Borough President Gale Brewer. “The foot count confirmed what many East Harlem residents already know through anecdotal observation, yet at the time of the report only 17% of vacant properties identified by Picture the Homeless were listed as vacant by the city. Similar under-reporting of vacancies was found across all community districts surveyed in the report… I believe Intros 1034, 1036, and 1039 – incorporating the recommendations I am submitting – will become effective tools to capture New York City’s stock of vacant properties and bring these parcels back into use to benefit communities and the city as a whole.”

“These bills, if enacted, would send a strong message that the city is serious about addressing the crisis of homelessness and the scarcity of affordable housing,” said a representative from the Cooper Square Committee. “Vacant properties are pervasive throughout New York City. The failure by the City to develop these vacant properties, the vast majority of which are locating in low/moderate-income communities, not only perpetuates the affordable housing crisis and fails to resolve the crisis of homelessness, but it fosters blight in these communities, and discourages private sector investment and job creation. This legislative package will help to disincentivize warehousing and speculation, and ultimately create opportunities for extremely low income, permanently affordable housing. We urge passage in this legislative session.”

“In 2004 we asked HPD how many vacant buildings there were,” said PTH board member William Burnett. “HPD didn’t have that information.  We said, “Well, let’s get it.”  HPD said, “There is no serious issue with vacancy in the city.” Knowing how many vacant properties there are and why they’re vacant would go a long way to informing government officials’ housing policy choices.  They would also go a long way to informing advocacy from among the non-profit sector.  But we need these things to be encoded in law.  Our own experience, at Picture the Homeless, is that not every government official thinks this type of transparency is in their political interest.  So we need it to be in their legal interest.  So I urge you to move these bills forward.” 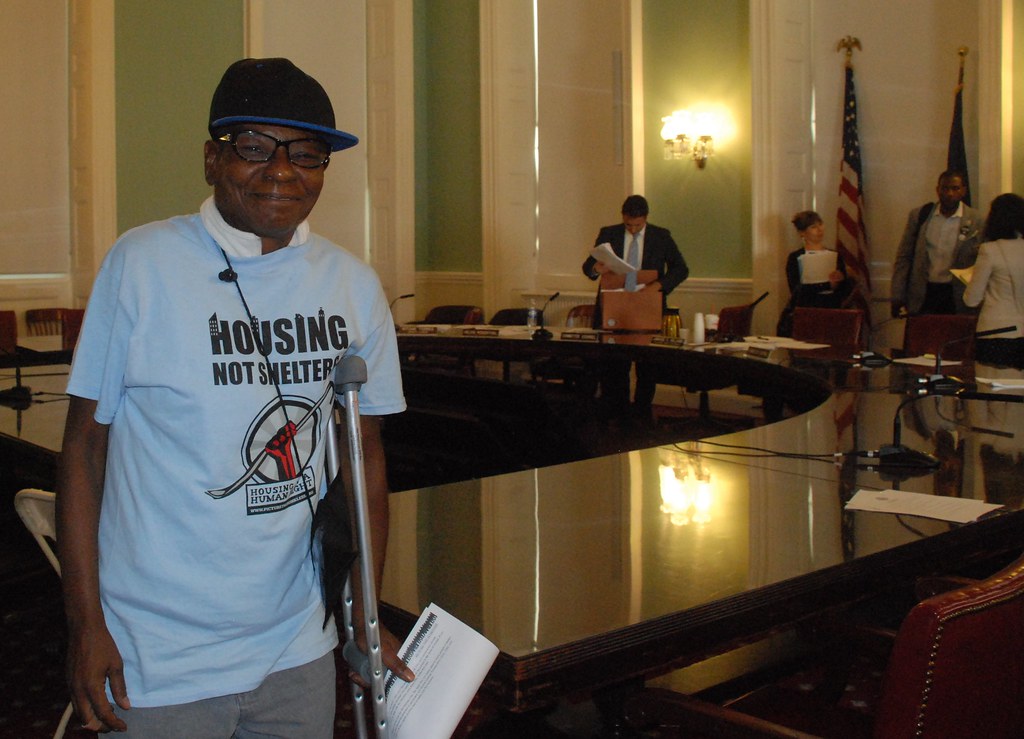 “New York City has thousands of vacant lots, as counted by Picture the Homeless,” said bill sponsor Ydanis Rodriguez at the hearing. “It’s time we kept an official record & explore affordable housing development on these lots.”

“Information about public lands is kept from the public,” said Judith Goldiner of the Legal Aid Society. “So it is hard to determine what land is actually available. Intro 1039 would remedy this problem by requiring HPD to conduct a survey of public land. We strongly support this bill and believe in its capacity to greatly help our clients.”

“This bill is a critical first step toward citywide practices that encourage the consistent, responsible use of public land and buildings for permanently and deeply affordable housing and other community benefits,” said Adrien Weibgen of the Urban Justice Center’s Community Development Project. ”

“Nobody knows you when you’re homeless,” said PTH member Marcus Moore. “Vacant apartments sit abandoned while the City and private landlords say it’s not the right time to buy or sell. So these places are usually left open and neglectedThese speculators aren’t interested in building up communities. They’re only interested in making deals with high-end property owners to make a profit while individuals and families continue to swell up the shelter system. This is a real strain on community members because eventually this makes rents go up and people are displaced.”

“NYCCLI helped to devise these bills precisely in response to the idea that the city has run out of property and room to develop affordable housing,” said John Krinsky, of the New York City Community Land Initiative. “We know—and homeless people who walk neighborhoods knew before anyone else—that vacant property is being warehoused, and that it it&#39;s the by-product of and the fuel for cycles of disinvestment and speculation. These cycles create homelessness, and have been doing so with greater intensity in the past decade. It is time to stop the cycle, and the Housing Not Warehousing Act is an important place to start.” 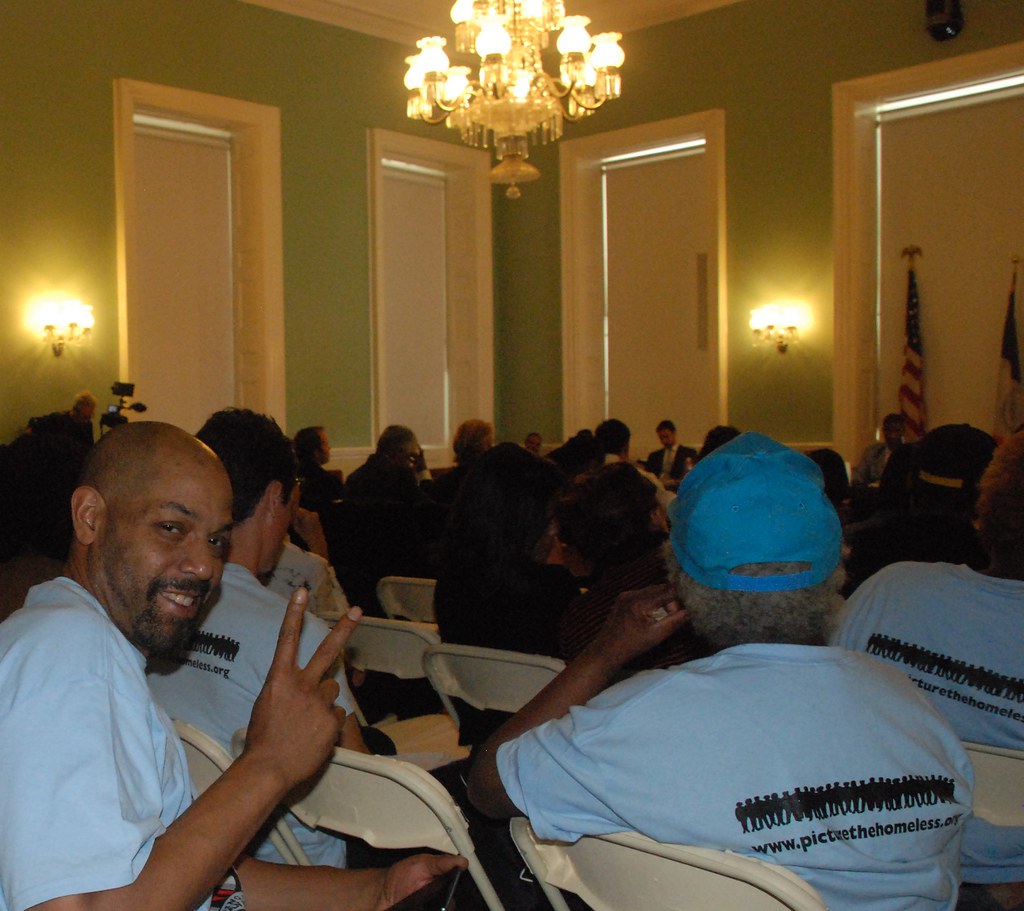 “We put you in office, and you must also be held accountable,” testified PTH member Cecelia Grant. “This public land is just that – public land for the people. The government should work hand in hand with the people to ratify the problem the housing crisis has created. The government has the land – why can’t the people live on it? Why can’t we have low income, permanently affordable housing? We need these bills to be passed in the name of change. If you really want to help with this situation, pass these bills. Make that step.”

“Legal Services NYC commends the sponsoring council members and Public Advocate James for advancing these important bills,” said LSNYC researcher Sagiv Galai. “The Housing Not Warehousing Act represents the integral first steps in addressing a phenomenon that is detrimental to the effort of expanding and preserving affordable housing in New York City. As the dedicated advocates from Picture the Homeless have educated us all on this topic, “vacancy affects everyone. But we have seen in our work that it causes particularly unique and disparate harm in the communities of our city which are most vulnerable to displacement and homelessness.”

“Have you ever driven through a neighborhood and observed all of the commercial real estate in use?” asked Al Williams, of Picture the Homeless, in his testimony. “Now, have you ever looked up and noticed all of the vacant residential units in the very same building as those commercial storefronts? This is what is commonly referred to as warehousing. This warehousing is hurting our communities by perpetuating homelessness, adding to urban blight and a list of other factors leading toward gentrification of mostly minority neighborhoods throughout the city. The solution is simple. Create more truly affordable housing for the low and extremely low income residents of NYC and the way to do so is to pass the Housing Not Warehousing Act now! ”

“These bills represent a critical opportunity to identify unutilized property that should be tapped to create deeply and permanently affordable housing, and to serve other community uses such as open, cultural and commercial space,” said Eve Weissman of the New Economy Project. “We believe these objectives could be accomplished in part through the
transfer of vacant and unused property to community land trusts.”

“New York City is not just for the rich,” said PTH member DeBoRah Dickerson, “but also for those who want to better themselves and their families, and maintain where they live and their communities. John F. Kennedy once said, “ask not what your country can do for you, but what you can do for your country.” Homeless and formerly homeless volunteers have done the count. And we’ve done it twice in one decade. We do not need to tear down but build UP in our communities! New York City needs to be a vibrant community a multi-cultural, multi-racial city where people can maintain stability. I am asking you to pass the Housing not Warehousing Act. It’s good for everybody.”

“We have the land,” said PTH member James Metz. “We have the resources! This city is facing a housing crisis that isn’t going away and more innocent people will be bullied and/or killed in these homeless shelters until we enact these bills. Blocks upon blocks of vacant lots and boarded up buildings could be used to house the homeless of this city and the Housing Not Warehousing Act seeks to eradicate this problem. Please do the right thing and vote for this legislation!”

“Currently, so many properties have been abandoned by their owners and have become major eyesores,” testified Alexis Smallwood of Rockaway Wildfire. “These property owners are creating a quality of life issue because when properties are not maintained, they become a dumping ground and infested with rats and roaches. This adds to the problem of broken windows in the community. Homeless people and families move in, and because the city has no leverage over these properties, it cannot provide the support or homestead opportunities so that these families can live safely. The city needs to hold private landowners responsible for their irresponsible behavior, and create this registry.” 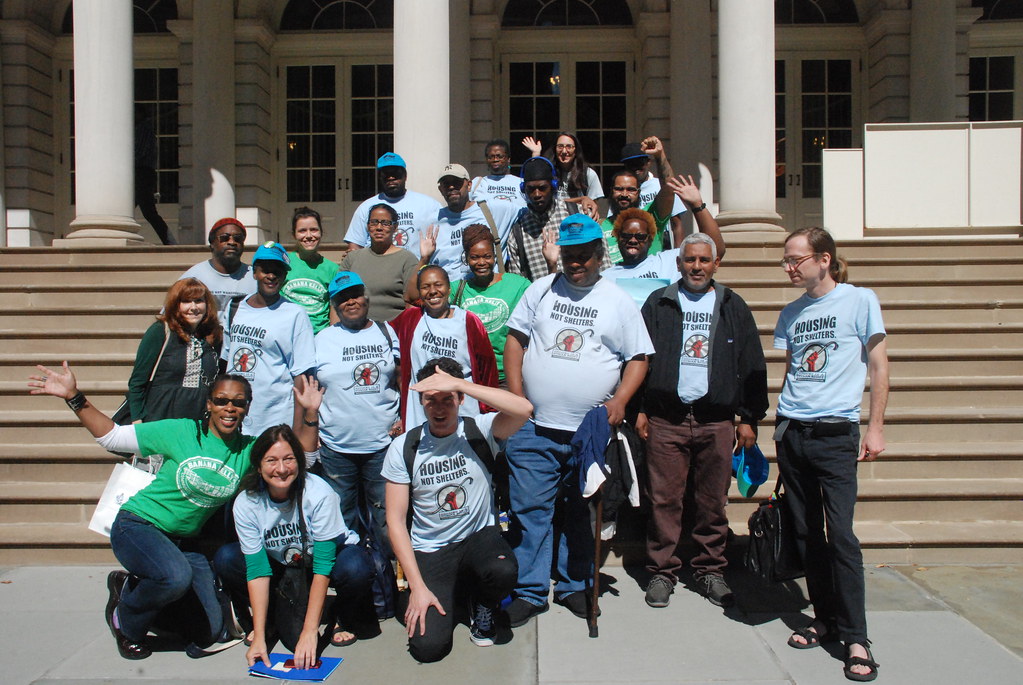