Last week, NYC Mayor Bill de Blasio announced he’d be releasing a new plan to deal with homelessness. But when members of Picture the Homeless asked for a meeting, they got stonewalled. 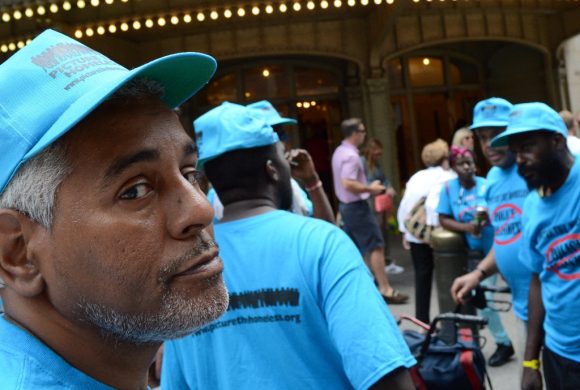 As the Amsterdam News reported, “The upcoming plan is the third one to deal with the homeless in just over a year. Critics say that like its predecessors, actual homeless people had no part in shaping the plan, and City Hall staff continues to refuse to meet with homeless activists to discuss it.”

“How are you developing a policy without going into the homeless community and getting feedback?” asked Jose Rodriguez, a member of Picture the Homeless. “They continue to throw wood on the fire—and money; $1.6 billion is being spent every year on shelter, but it’s being spent unwisely.”

So when Mayor Bill de Blasio appeared on the Brian Lehrer show, Jose called in to confront him about the plan.

We’ve already seen some positive motion on our issues from the administration in the past two months, and that makes us very optimistic. And in the coming weeks, we’ll be stepping up the pressure to make sure a meeting happens, and to make sure that any plan to deal with homelessness includes the demands and expertise of our members, who have been organizing around these issues for over 17 years.

From the full transcript, here’s the entirety of Jose’s conversation with the Mayor:

Lehrer: You have the Mayor here. You can ask him your question. Go.

Question: Yes, hi Mayor my name is Jose. I’m a proud member of Pictures of Homeless, and I would like to know would you consider coming to meet with us to discuss the homeless crisis in New York City.

Mayor: Jose, I have a lot of respect for Pictures of Homeless. I think you guys have done a great job of helping people understand that human beings are going through a lot and need support. We’ll figure out how to work together. I’m always careful not to commit to specific meetings, but we’ll figure out how to work together. What I do want to tell you is – and I think your organization has really helped on this – since we’ve put the HOMESTAT initiative in place, which the notion of which was go out all over the city and go to where homeless folks are in the street and engage them humanly over and over again, find out what they need, and what we can do to help them come off the street. In the last year that that’s initiative has been in place, 700 people have come off the street who are now getting mental health services if they needed that, substance misuse services, you know, a clean, positive place to live – a lot of other help to break that cycle of having been street homeless. So I think understanding each person needs a particular solution and that we had to be hands on and individual by individual we’ve been able to really make an impact, and we’re going to keep doing that.

Lehrer: Jose, was there a specific thing you wanted to ask or suggest to the Mayor regarding homelessness?

Question: Yes, that, you know, at Picture of Homeless, we’ve been in existence 17 years, and you know as members, you know, formerly homeless and homeless I think that we have an insight on homelessness.

Lehrer: So give him one – our time is short, but give him one piece of that insight that could lead to better policy, because we have record homelessness in the city, right? And it’s one of the most daunting things in his reelection year – if I can put it in that context – that’s going to follow the mayor through 2017.

Question: Yes, well, at Pictures of Homeless we have a housing not warehousing [inaudible] and we also we’re trying to get a CLT program started, so we have and also gaming ground – we have a lot of good ideas, and we just want the opportunity to meet with the Mayor and to discuss these issues because 60,000 homeless people – that’s a community. And I’m afraid it’s not being heard and, you know, I just –

Mayor: So let me just say to Jose, I appreciate it very much, and I’ll make sure members of my team meet with you and that everything you’re putting forward gets to me. But look I think what Jose’s indicating immediately is a need for a greater focus on affordable housing that can reach people, and one of the things that I’ll be talking about in my SOTC remarks on Monday is that we already have the biggest affordable housing plan in the history of this city, but we’re going to improve it further. There’s been a lot of folks who have said can we see more of the apartments in that plan reach folks at a lower income level, folks who are earning $20,000-plus or $30,000-plus and need more help – more seniors, more veterans. And that’s what we’re doing. We’re adding – within our plan, we’re retooling our plan – 10k apartments now will be moved into the category of folks who make those lower income levels, seniors in particular so many of whom are on fixed income, and veterans. And we know that veterans have been part of the community too often who end up homeless. We’ve ended chronic veteran homelessness. It’s something we’re very proud of, and we did with the Obama administration. The folks who were homeless for years and years – that problem was ended. We still have veterans who find themselves homeless for periods of time. I want to end that, but this change we’re making in our affordable housing place is going to help us to do that.