Picture the Homeless is pleased and honored to announce that CAAAV: Organizing Asian Communities will be honoring us at their 30th Anniversary Gala, to be held on the evening of Wednesday, May 25 at the headquarters of 1199SEIU, 310 West 43rd Street, between 8th and 9th Avenues. We would love all of our supporters and allies to join us at the celebration! The theme is “The People Build the Place, the People Build the Power.”  It will be a festive night of awards, food, performances, and community. 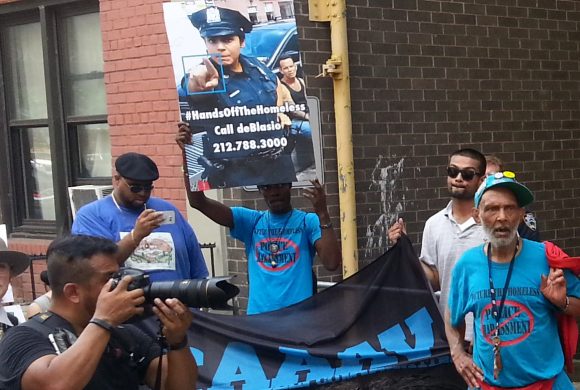 CAAAV Organizing Asian Communities works to build grassroots community power across diverse poor and working class Asian immigrant and refugee communities in New York City. We were founded in 1986 by Asian working class women alarmed by the spike of hate violence on Asian communities and its root causes stemming from institutional racism in the United States.

Picture the Homeless has been a long-term ally of CAAAV, both in the struggle for police reform, and in combating gentrification and displacement. When a Queens community organized protests of a homeless shelter, with many Asian immigrant residents shouting slurs and insults to predominantly African-American and Latino parents with children, CAAAV reached out to us. Together, we demonstrated in solidarity with shelter residents. By exposing the ways in which the interests of marginally-housed and homeless people overlap, and how issues of racism and xenophobia and policing exacerbate the housing crisis, they are at the forefront of building a truly radical housing movement in New York City.

Please join us on May 25, as we celebrate this history of action and solidarity.

Save the Date: Dancegiving 2016!Overhauling DHS: the Good, the Bad, and the Missing