October 16, 2015: In collaboration with US Department of Arts and Culture NYC Field Office during the Week of #DaretoImagine, Picture the Homeless hosted a cultural intervention where participants were invited to envision a future where housing for all is realized and a fundamental principle in our society. We invited folks from all over the city to come and celebrate resistance and resilience of homeless folks in NYC who are currently fighting the anti-poor and anti-homeless policies of Mayor De Blasio, as well as all over the nation.

The significance and power of this event cannot be overstated. Homeless people have been run out of this plaza for weeks and months, and on October 16th THEY TOOK IT BACK. They were recognized as poets, as artists, as people deserving of the right to occupy public space.

For a full set of amazing photos from photographer Bridget Bartolini, click here!

The event featured a film screening of “Living as Struggle: Story of a Homesteader in Ten Chapters” a film by Zishun Ning, featuring Marcus Moore, an activist and homesteader; as well as collective artmaking, poetry, performances and storytelling in East Harlem. 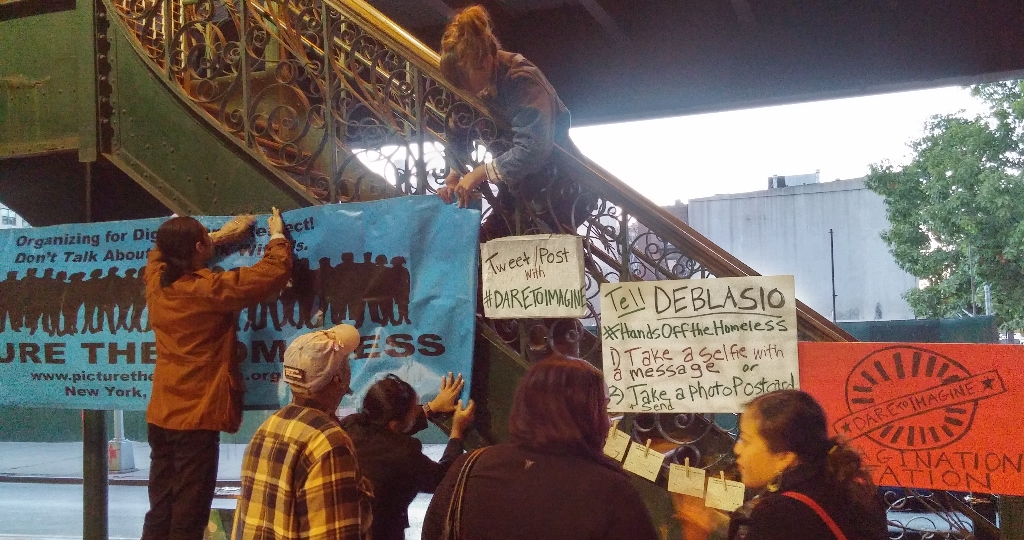 BREAKING: Homeless People Confront NYPD Commissioner Bratton!The City is selling its property to the highest bidder. Help us fight back.