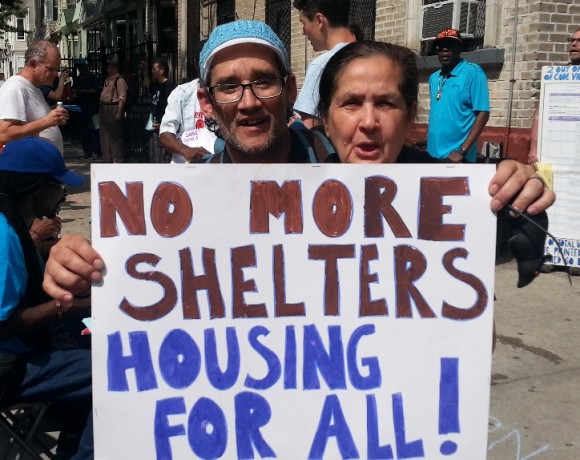 New York City is at a breaking point. New Yorkers are losing rent-regulated units to the shelter system; the Mayor’s affordable housing programs blatantly leave out housing for homeless and extremely-low-income folks; shelters are bursting at their seams; and the police arbitrarily harass homeless folks on the street. It is clear that the City has no comprehensive plan to address this housing crisis.

Shelters cost more than housing. Arresting people costs more than housing them – the total cost to taxpayers on one unnecessary arrest is $1,700 – meaning it’s cheaper to pay someone’s rent for a month than to arrest them and put them through the system.

Homeless people have a better plan. We collaborated with nonprofit housing developers to create the Gaining Ground Pilot Project, which uses the community land trust model to save taxpayers money at the same time as it develops housing, incubates small businesses, creates jobs, and slows down displacement from gentrification. Using existing City resources, and prioritizing housing over shelters, we can house the homeless in New York City. We were encouraged to see that the Mayor committed himself to “reallocate a portion of shelter funding to finance lower-cost permanent housing” for homeless folks in his 10 Year Plan… and now it’s time to hold the Administration to task!

“We need housing,” said PTH member Floyd Parks. “It’s really simple. They’ve studied us, looked down on us, treated us like animals, arrested us, warehoused us in shelters… Now they need to listen to us. We need housing.”

On Wednesday, January 27th at 11AM we will be unveiling Gaining Ground and call on the Administration to work with all of us on this framework so that everyone has a home.

Please join us on the steps of City Hall!