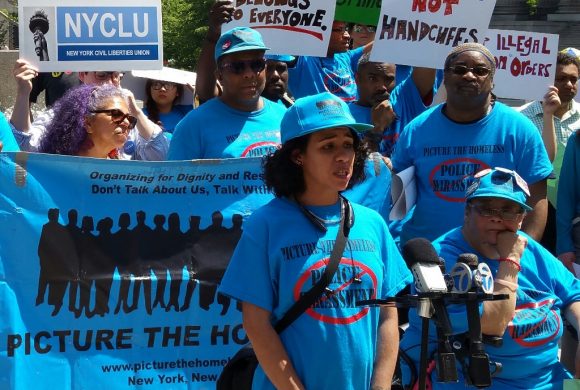 The New York Civil Liberties Union filed a complaint today on behalf of Picture the Homeless, urging the New York City Commission on Human Rights to investigate the NYPD’s practice of forcing homeless people in Harlem to “move along” when they have not violated any laws but are simply present on streets, sidewalks and in other public spaces. Our complaint argues that the NYPD’s actions violate the Community Safety Act, which prohibits “bias-based profiling,” including targeting people based on their housing status. Today’s action is the first major action brought under the Community Safety Act.

In June of last year, the NYPD launched a concerted effort to disrupt East Harlem’s community of street homeless people. Individuals who refuse to follow these “move along” orders are often told they will be arrested, taken to a psychiatric hospital or that their belongings will be destroyed.  Many homeless people targeted by the NYPD receive numerous orders in the course of a single day and are herded from block to block for no apparent reason.

“The police take advantage of our powerlessness as homeless people,” said Chyna Burke, a member of Picture the Homeless. “Cops move us from spot to spot every thirty or forty-five minutes. I’m not doing anything illegal.”

Full set of photos from today’s action is right here!

Gothamist: NYPD Accused Of Shuffling Homeless People Around The City Without Legal Justification 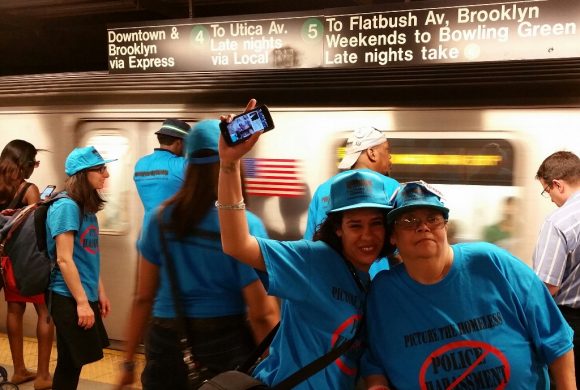 “Move along” orders are not only humiliating and deprive homeless New Yorkers of the freedom to occupy public spaces the same as other New Yorkers, they are highly disruptive to homeless communities. Picture the Homeless members have spoken about how East Harlem’s street homeless community provides family-like support for many homeless people and creates a sense of security that is not attainable in the city’s shelters where they feel unsafe. Moreover, there are no drop-in centers where homeless people may use bathrooms, shower, or rest in East Harlem.

“Homelessness is a tragedy not a crime, and homeless New Yorkers need housing and social services not police intimidation,” said NYCLU Executive Director, Donna Lieberman. “Targeting homeless people for standing on a public street won’t solve any problems and sends the wrong message about how we should treat vulnerable New Yorkers.”

“Public spaces and basic freedoms belong to all New Yorkers,” said Alexis Karteron, supervisory senior staff attorney at the NYCLU and lead counsel on the action. “Just because someone has fallen on hard times and does not have a home should not mean they deserve less dignity and freedom than anyone else.”

“When I was sleeping on the streets, they’d come through every couple of hours and tell us to move along, and threaten to arrest us or throw our belongings away if we didn’t,” said Picture the Homeless member Jazmin Berges. “I’m proud to be standing up today because the practice of ‘move along’ orders is unjust and it has got to stop.” 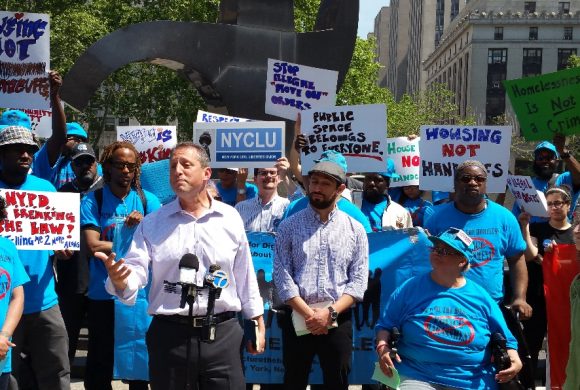 “Even when we’re just standing around, they tell us to move along,” said Doc, a member of Picture the Homeless. “I’m part of this community, too.”

NYPD officers issuing “move along” orders and their supervisors have made it clear they are acting as part of a coordinated effort to target homeless people. Picture the Homeless and NYCLU contend these actions violate the Community Safety Act, passed in 2013, to ensure that the NYPD relies on a person’s actions to make law enforcement decisions, rather than factors like race or housing status, and to bring meaningful accountability and transparency to the NYPD.