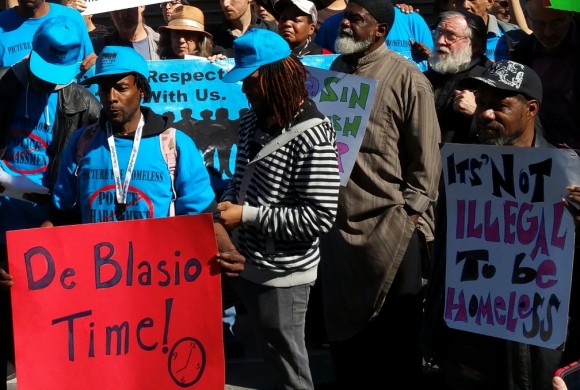 This month, City Hall announced that “the New York City Police Department will immediately begin re-training all Department of Homeless Services security staff and send an NYPD management team to DHS to immediately develop an action plan to upgrade security at all shelter facilities.” Ostensibly a response to numerous violent incidents in shelters, this misguided approach will actually serve to make shelters less safe, and dissuade street homeless people from entering shelter.

“This is a horrible idea,” said PTH Civil Rights Campaign member Al Williams. “Living in shelter, this wouldn’t make me feel any safer. All this will do is deter people from entering shelter. When there are no consequences in the overwhelming majority of cases where police kill a civilian of color, police are clearly under no obligation to treat us with courtesy, professionalism, or respect. This is another one of Bill Bratton’s reckless policies that target homeless people and take police resources away from fighting crime, only to put them into punishing the poor.”

We believe shelters should be safe – but bringing police officers into the shelters will not make them safer. Getting people out of shelters and into actual homes is the only way to truly keep them safe. As Al Williams said:

“We have this system in place that they spend so much money to shelter the homeless, when the real issue is permanently housing the homeless.”

Al was also quoted in the following news stories on the subject!

While the city is saying that they won’t be putting officers in the shelters, homeless people are concerned that this is merely the first step towards a more active and aggressive police presence inside supposedly safe spaces. Al Williams wondered: “Once this is implemented, and then another incident occurs and someone gets seriously hurt or murdered, what’s going to be done then?”

Overhauling DHS: the Good, the Bad, and the MissingHomeless Women Say: NO WAR ON WOMEN!