The Manhattan Institute is a right-wing think tank that’s spent years advocating for the “broken windows” theory of policing—cracking down on minor offenses like selling loose cigarettes on the theory that doing so can preempt serious crime… except that in practice, that’s meant cracking down on low-income people and communities of color. 81% of people hit with “broken windows” summonses between 2001 & 2013 were African-American or Latino. Under Giuliani and Bloomberg, their racist ideas were the law of the land, resulting in constant harassment—and a massive upswing in police officers murdering people of color, like Eric Garner.

Homeless people have long been punching bags for the police, facing constant ticketing and arrest for minor offenses. Last winter, a homeless vet who had been arrested for sleeping on a roof was “baked to death” in a cell on Riker’s Island.  So today we took the fight to its source.

“I’m protesting because I’m a person of color, and I don’t appreciate the way people behind the scenes get to pick and choose when and how I have rights,” added Picture the Homeless member Darlene Bryant.

“we believe that ‘broken windows’ policing kills and ‘quality-of-life’ policing kills,” Lewis recounted back on the street, “and that since they’re promoting these policies that end up killing people, they should be held accountable and see the bloody hands and the names of people that have been killed because of their policies.”

“In New York City, the group Picture the Homeless staged a rally at the right-wing Manhattan Institute before a march to Penn Station, where they held a “die-in” for 11 minutes — that’s 11 for the amount of times Garner repeated his last words, “I can’t breathe.” Protesters called for the repeal of the NYPD policy known as “broken windows.””

“We’re here because that theory was promoted inside that building, the Manhattan Institute,” Picture the Homeless board member William Burnett announced through a megaphone. “So now NYPD is institutionally equipped to judge whose rights merit protection and whose don’t. Combine that with the department’s militarized policing tactics, and we effectively have, instead of a civilian police force, a standing army occupying this city. As if its inhabitants were a foreign population they must intimidate and control.” 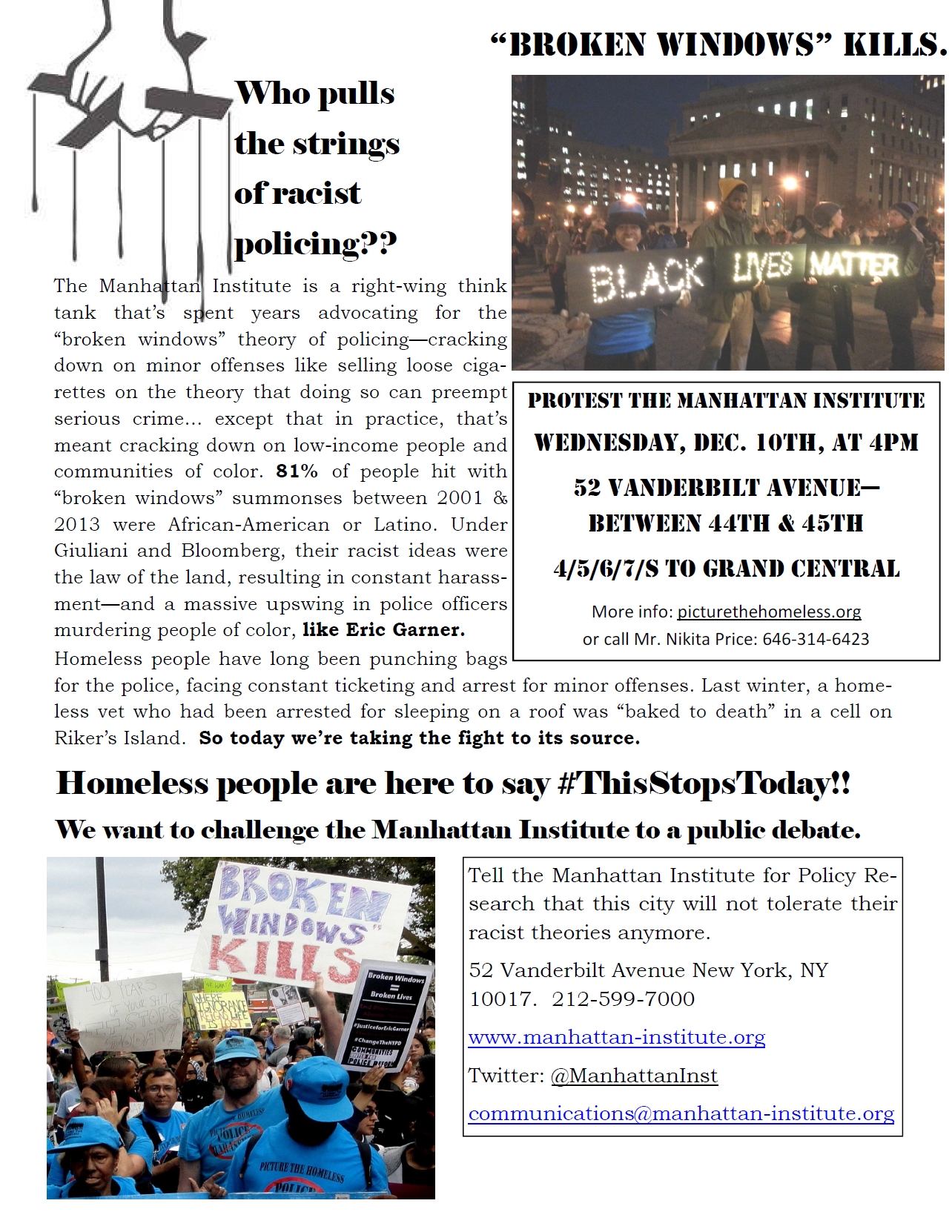