On Saturday, homeless women who are members of Picture the Homeless helped lead a march through Harlem for International Working Women’s Day.

“As women, it took us a long time to get where we are today,” said PTH member Darlene Bryant, who will be marching on Saturday. “To get the right to vote, to get the right to real freedom of speech. But the fight isn’t over. Women have rights, but we have to stand up for those rights. As mothers, as sisters in the struggle, whether we’re on the streets or in a shelter, we need to stick together. Homelessness impacts women differently than men. We have to deal with the fear of attack, sexual assault, all sorts of things. That’s why we’re marching on Saturday.”

Check out this excellent gallery of photos from Saturday’s march! 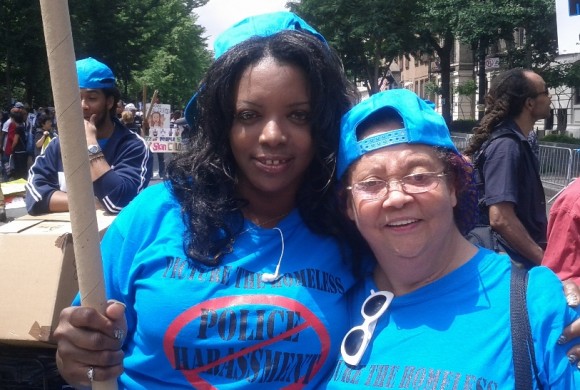 See below for some excerpts from the dynamic speeches that our members gave!

“What is the purpose of these lots being left vacant so long? Why aren’t they being used? Well I have a good idea! Let’s take it over, have a rally, and a sleep-out, build our tents and make it a tent city of 2016. Because the only way we’re going to get housing is to show them we’re serious and for real and take back our city! Right now our neighborhoods are going to the real estate industry. Real estate wants to purchase and build on one site, and they have a sign up to buy property on the other site. The new form of gentrification is hoarding! They’re hoarding these properties, and not for the better—just for the money. We want to see LOW INCOME AFFORDABLE HOUSING on this land. We need medical care, seniors, disabled, veterans, for everyone! We don’t need to be out here like this. I myself just came out of the hospitals on the 1st, after being in the hospital for one week for asthma, after being out for two weeks in the elements. We shouldn’t have to be out here!” – Darlene Bryant

“Being homeless for three years has changed my life in different aspects. I don’t judge a book by its cover because you can’t judge someone until you get to know them. And that’s what a lot of people do when they see homeless people, is judge, not knowing that a lot of homeless people (including myself) have backgrounds, come from homes. We take care of each other, as a community and as a family. The chaos with the police brutality before has been incredible. Because we were the most vulnerable people outside, we became a target for them to harass us. The police also have specific ways of harassing women. A lot of us were stopped for going to the bathroom. Because we live in the streets, we have to go to the bathroom outside, so if the police catch us they would give us a ticket, which then becomes a summons, and then they can identify us, and come and pick us up because they know we have a warrant. So we’re a “quick collar.” There’s a bathroom in the Metro North but we’re not allowed to use it–it’s always closed! There’s a bathroom in Wendy’s, but only for paying customers. So all we have is the park.” – Jazmin Berges

“I’m stopping here in front of HRA today to express the concern around the spending of funds for couples and women with families. For couples, HRA is spending over 3500 dollars a month for us to be in a room, literally just four walls and two windows with no kitchen and no bathroom. We could get a two bedroom apartment for less than that! For women with families, HRA is spending much more—about $5,000 for the full household. Basically, this means that they are warehousing people—keeping us in a system that’s not helping us, and where we struggle with stable education options for our children, health issues, and dangerous living conditions. A lot of the residents of these shelters are working with families, who don’t make much income and who really need stable and secure housing. I would like to see the funding they’re spending on keeping us in shelter reallocated to pay for apartments. Right now, the money that’s being spent on us could house TWO families in an apartment, instead of wasting taxpayer’s money for a room. Picture the Homeless has a plan that would make this possible, the Gaining Ground Pilot Project. Gaining Ground would take money from the shelter system and invest it into the permanent housing solutions we need.” – Charmel Lucas

Here’s why putting cops in homeless shelters is a terrible idea.“This land is your land” – vacant city-owned lots could house 50,000 people