Last week Mayor de Blasio announced that he would be releasing a new plan to fight homelessness, the third such plan in just over a year. Like its predecessors, homeless people had no part in shaping this plan, and City Hall staff refused to meet with homeless activists to discuss it. 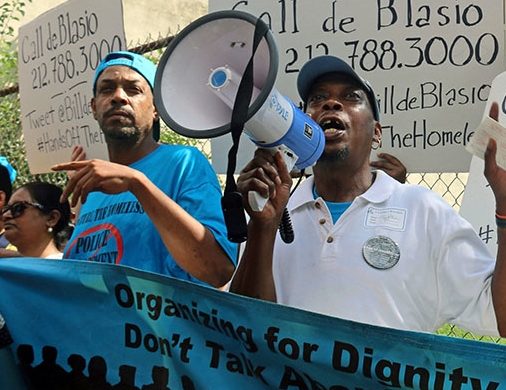 “How are you developing a policy without going into the homeless community and getting feedback?” asked Jose Rodriguez, a member of Picture the Homeless (PTH). “They continue to throw wood on the fire–and money! $1.6 billion is being spent every year on shelter, but it’s being spent unwisely. They say they’re creating affordable housing but it’s not reaching the people who need it most. If you don’t think homeless people are part of  NYC communities, I know 60,000 people who think otherwise. Why can’t we have a voice within City Hall?”

PTH member Jean Rice said “We haven’t read this plan, but that’s the problem. I know from bitter experience that a plan developed with no homeless people at the table will fail to address the real issues and provide real solutions. I fear that, like previous administrations, this Mayor’s solution to the current historic homeless level in New York City is the institutionalization of homeless New Yorkers. The shelter system is not a substitute for permanent housing, and is not a conducive element to community-building and involving homeless New Yorkers in civic participation. Any program to deal with homelessness must move us away from this bloated, expensive system and towards the cost-effective common-sense policies developed by homeless people. Otherwise, it will fail.”

“You can’t speak for me,” said PTH member Siafa. “The current status quo has a lot of people profiting off of homeless people. Shelters get paid to warehouse us in deplorable conditions. Cops fill their quotas by harassing and arresting us. The Mayor’s new policies have just been more of the same. The general ignorant public might buy that, but unless he talks to homeless people, his new plans will achieve nothing.”

Ms. K. Samuels, of Picture the Homeless, said: “This mayor only talks to people who will go along with whatever he says. He might have some homeless advocacy groups that he tells to get in line behind this plan, but he refuses to speak with actual homeless people. It’s like he doesn’t think homeless people have anything to offer. Well, we do, because we’re the ones living in his failed system, and we’re the ones who will have to live with the consequences of his policies, and any plan that doesn’t take our demands into account is doomed to failure – like the homelessness plans of his predecessors.”