There’s lots of good stuff here. Demands that PTH members have been fighting for since 2002 will finally be realized. But the real problem with this plan is what’s left out of it.

Commissioner Banks met with members of Picture the Homeless during the 90-day review. Homeless people living in shelters, as well as folks on the streets who refuse to go into shelter, gave him an earful about what’s wrong with the system, and what needs to change. And we were gratified to see many of our demands make it into the final document, released this week.

And check out our critique of the proposal in this article from Gothamist!

PTH member Rogers said: “While we applaud HRA Commissioner Banks for actively pursuing reforms that will make the shelter system less destructive—and for consulting with homeless people in the process—we also need his boss to stop actively pursuing housing policies that make more homeless people. We need him to really listen to the homeless and formerly homeless people who are tired of being stuck and in shelter, and who know what ‘solutions’ to homelessness really work – programs like our Gaining Ground Pilot Project, developed by homeless people in collaboration with nonprofit housing developers. Gaining Ground lays out a framework to preserve and build permanently affordable housing for those with the lowest incomes in New York City, using creative models of community controlled land and housing, while phasing out wasteful and dangerous shelters that pour billions into the pockets of realtors and (shelter-owning) advisors.”

“Focus DHS operations on overseeing the not-for-profit shelters and related services and implement new accountability systems.”  When Commissioner Banks met with us, our members demanded “New accountability systems” over and over again, and we’re glad to see them here. Currently, homeless people have no recourse when dealing with problems in shelter – and there’s a lot of problems. Health hazards, abusive staff, deteriorating conditions, and more. The devil, of course, will be in the details – what kind of systems? How will they work? When will they be introduced?

“Provide increased notice prior to non-emergency transfers:” This is huge! As this powerful video shows, DHS’s habit of transferring families with little to no advance notice is hugely disruptive. We met with then-Commissioner Taylor shortly after these members of PTH got 24 hours and two garbage bags to move out of a place they’d been living for up to two years, and he told us that providing increased notice wouldn’t be possible. We’re glad his successor has more vision, and humanity.

“Families seeking homeless prevention or shelter services will obtain these services within their borough, rather than through the City’s centralized intake center in the Bronx.” “Eliminate the requirement for school-age children to be present at PATH for multiple appointments;” “Align access procedures for adult families with procedures for families with children.” The bureaucratic, centralized intake process has long been a huge part of what makes the shelter system so disruptive for families with children. These changes are all things we’ve been demanding since 2002, and will significantly diminish the extent to which applying for shelter results in lost jobs, missed school days, and worse.

“Increase enforcement of the source of income discrimination law.” This is excellent. As we’ve highlighted in our Facebook group “Landlords Won’t Accept My Voucher,” tons of homeless people have watched their vouchers expire because they can’t find a landlord willing to take it – even when they call dozens of realtors and brokers every single day, even thought it’s illegal to discriminate against source of income. The fact that the city will start to go after these law-breaking, discriminatory landlords could make a big difference.

“Target outreach to doubled-up families with school-aged children” City agencies have long worked from a definition of homelessness that leaves out many people that we – and the federal government! – consider homeless. Targeting prevention services for students of families living in doubled-up situations (who are reported as homeless under the McKinney-Vento Act) will help address this imbalance, and could help these families get the help they need to avoid having to go into shelter.

The city “will develop and implement alternatives to avert discharges from State prisons to DHS shelters.” The prison-to-shelter pipeline is a problem our members have long fought against, and any effort to help people find real housing upon leaving incarceration is welcome.

There are many more. Using HPD to inspect shelters is a huge step forward… considering how minimal the shelter inspection process was! “Communicating more information to clients through flyers, posters, and other media” is significant, when most homeless people have been completely in the dark about changes in the system, or reliant on shelter staff who don’t always have any interest in keeping them informed.

The review also fleshes out some crucial changes that Picture the Homeless had already won from the administration, including the end of the “cluster site” shelter program and the implementation of an enhanced shelter repair program.

And of course there’s lots of stuff that makes us very nervous. 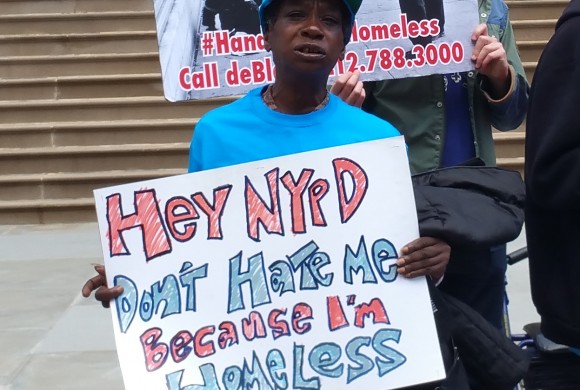 “Fully launch HOME-STAT to address street homelessness” As PTH member (and 15 year veteran of the streets) Jesus Morales said of HOME-STAT, “More case workers, more cops – that does nothing for me. Meanwhile the cops are treating homeless people like dirt, every day. That’s the problem the mayor needs to fix.” The central role of the NYPD in this initiative dooms it to fail – and in the absence of real housing options, no program will truly reduce the street homeless population.

“Increase safety in shelters through an NYPD management review and retraining program” As we’ve argued extensively in the press, this is a terrible idea. Cops treat homeless people with utter disrespect, every single day, and they will not make homeless people more safe in shelter.

“The City will also implement a training and employment program at select shelters for residents to learn trades by providing system-wide shelter maintenance services in private shelters.” We’re all for helping homeless people get jobs, and for making shelters less disgusting, but will this be voluntary? Or a shelter-only version of the flawed WEP program, that forces welfare recipients to work for minimal pay with no path to actual employment?

“The City will partially convert current shelter sites into permanent housing using new shelter models like Gateway Housing and Homestretch, which include affordable permanent housing, shelter units, and community space at the same location.” While we believe housing is the solution, we are VERY NERVOUS about a model that essentially uses shelters to subsidize housing. These models rely on the perpetual existence of homelessness to create housing for low income folks, and there are better ways to achieve that kind of cross subsidy that the city is not exploring (like community land trusts, and mutual housing associations) and that don’t rely on people’s suffering to create housing. The way out of the city’s shelter quagmire is to focus resources on housing, not make it more dependent on expensive shelters.

And we’re also left with lots of questions. One bullet point promises “Rationalizing shelter provider rates” – we definitely agree that shelter provider rates are not rational, with some places making upwards of $3,500 a month for every household they warehouse, but does this mean that they’ll be reducing the exorbitant amounts they pay to “nonprofit” shelter providers? The review goes on to say that “The City is evaluating payments to shelter providers to ensure they are sufficient to fund maintenance and services,” which makes us nervous that payments will be INCREASED, making them even less rational!!

Another commits that “The City will increase safe haven beds, increase the number of drop in centers” – but we’ve been hearing this for the past five months, and there is still no timeline or list of locations. Many of our street homeless members have said they’d be willing to get off the street and go into one of these facilities, but no one can tell us where they are! 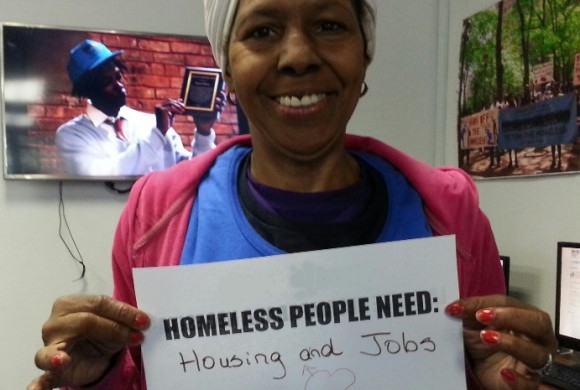 “Nothing here will fundamentally challenge the billion-dollar- a-year system of warehousing people in ‘non-profit’ shelters instead of providing homes to the tens of thousands of children and their parents,” said PTH member Rogers. “Meanwhile, as in the past, City Hall is not ready to go up against the real estate interests who profit from converting housing for poor and middle class families to $2500-a-month apartments as well as million-dollar co-ops and condos. In fact, as recent headlines have shown, he’s currently under federal investigation in connection with a real estate developer who contributed to his campaign.”

We understand that overhauling DHS means focusing on the shelter system – and lord knows there’s plenty of problems that need fixing in there! But as the review itself says, homelessness does not exist in a vacuum: “Income inequality, combined with other causes of homelessness such as domestic violence, overcrowding, eviction, and the loss of affordable housing in recent years are what bring people to our shelter system.” If the Mayor truly understands this, why did he introduce a housing plan so real-estate-friendly, so pro-gentrification, that developers are “very, very excited to pioneer” “new” neighborhoods? And why is he reforming a shelter system without introducing new housing ideas like our Gaining Ground Pilot Project?

Congratulations to CAAAV on Thirty Game-Changing Years!Here’s why putting cops in homeless shelters is a terrible idea.