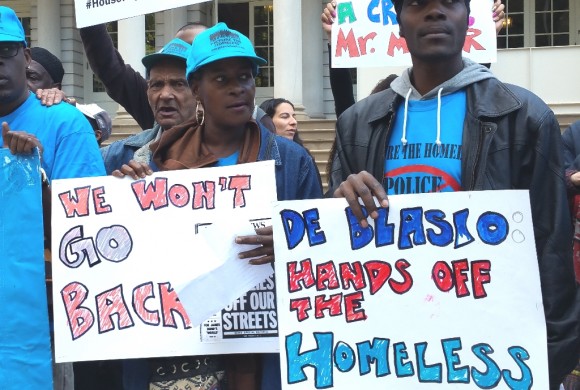 On December 17th, New York City Mayor de Blasio announced a series of new strategies and policies to deal with homelessness. The response from homeless people was swift, and clear.

“This new program is just more of the same,” said Jesus Morales, a member of Picture the Homeless, who has lived on the street for over 15 years. “More case workers, more cops – that does nothing for me. Meanwhile the cops are treating homeless people like dirt, every day. That’s the problem the mayor needs to fix. Just last night, hours right before this big announcement, I got woken up by a cop, kicking me. In the leg, in the back of the knee. I asked, ‘why are you kicking me?’ They said ‘because you have to go.’ Didn’t offer me help, didn’t offer me anything. Kicked me, hard, and told me to go. This happens every day. To all of us. To me and my brothers.”

The perspectives of our members were featured in many news articles and television segments:

Mr. Parks, a member of Picture the Homeless, an advocacy group, said that the mayor kept rolling out initiatives, but that he had not seen results. “I hear about $25 million for this, $20 million for something else,” Mr. Parks said. “Where is it?”

“Just last night, hours right before the Mayor made this big announcement, I got woken up by a cop, kicking me. In the leg, in the back of the knee. I asked, ‘Why are you kicking me?’ They said, ‘Because you have to go.’ Didn’t offer me help, didn’t offer me anything. Kicked me, hard, and told me to go.”

Arvernetta Henry, a leader at advocacy group Picture the Homeless, said the proposal does not solve the real problem. “The mayor needs to stop putting a Band-Aid on the situation,” she said. “We don’t want to be on the street. We want permanent housing.”

Joseph and her partner already received outreach. On the last day of their 10-day emergency shelter stay, city officials declared them “ineligible” for shelter… Joseph and Daniel are now living inside LaGuardia Airport — a place where nine months ago PIX11 News reported on the sizable homeless population.

“The Mayor and the police commissioner are trying to show people they’re doing something, to get the public off the back, but there’s nothing to it … except more surveillance and more police targeting homeless African-Americans and Hispanics,” [PTH member Floyd] Parks charged. “We need housing. It’s really simple.”

“People walk by me all day, every day, with big bags full of holiday shopping,” Jesus Morales continued. “Cops don’t say anything to them. To me, the cops say “why do you have all these bags? These bags have got to go.” And they seize them, throw them away. They need to help the homeless with something real – a place, a home, not a shelter. Not the street. So much money they waste, on cops and shelters. Shelters are no good. I’ve been robbed, the bathrooms are disgusting, there’s filth in the showers. They cost a lot, and they don’t help you get out of your situation. There’s so much development happening, but it’s not for us. It’s not for poor people, putting  in these neighborhoods. People are dying out here. Find us housing.”

TODAY: Homeless New Yorkers & Advocates to Announce Plan for Legal Action against City, NYPD for Unlawful ConductHomeless people are taking legal action against the NYPD. We need you.