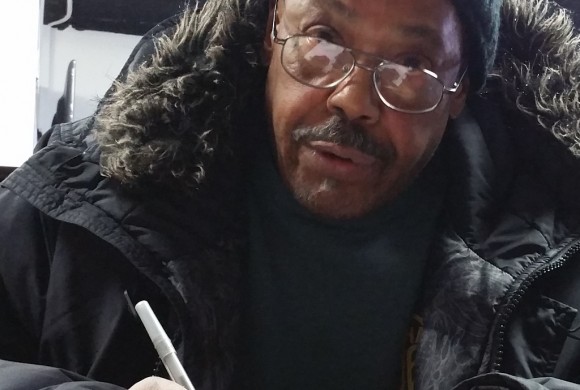 Following months of aggressive, inhumane police action targeting homeless people under Mayor de Blasio and NYPD Commissioner Bratton, including constant orders to move from public space even when they’re not violating any laws, several homeless New Yorkers today initiated legal action against the City. The homeless New Yorkers, with support from Picture the Homeless and legal assistance from the New York Civil Liberties Union, filed notices of claim over personal belongings seized and destroyed by city officials on October 2nd. The personal possessions taken and thrown away by NYPD officers and other city officials included birth certificates, medication, irreplaceable family photos, and other important documents.

Video of the October 2nd incident was released by the New York Civil Liberties Union on Monday.

Full set of photos from the press conference and the filing of the Notices of Claim are available here.

New York Post: “Homeless men sue city for kicking them off the streets”

Three homeless men are suing the city for rousting them from a street encampment this year, saying they are owed $1,515 for lost personal possessions — and an unspecified amount for the emotional trauma.

“I’m praying to God because I don’t believe in Mayor de Blasio,” said Jesus Morales, 42, who has lived on the street since 1999.

“Homelessness is a tragedy, not a crime,” said NYCLU executive director Donna Lieberman. The de Blasio administration has no right to treat their possessions “like garbage,” she added.

“A group of about 20 homeless people held a news conference to bring attention to what they described as strong-arming by city officials in moving people off the street. Three homeless men filed notices of claim with the comptroller’s office. They were represented by the New York Civil Liberties Union.The men are seeking compensation for emotional distress and for Social Security cards, birth certificates and other possessions worth about $800 each lost after they were shaken awake on the night of Oct. 2 and Sanitation Department workers took their belongings and threw them in the trash.”

“Surveillance footage acquired by the New York Civil Liberties Union shows NYPD officers and Parks Department employees destroying the possessions of two small groups of homeless men and women in East Harlem in early October, and is grounds for a new lawsuit against the city announced Monday afternoon”

Floyd Parks, 61 years old, said he chooses to live on the streets because of the “unbearable” conditions in the city’s shelters. “It’s bad enough I’m sleeping on the street, but now we’ve been targeted,” he said at a rally near City Hall Monday to protest the mayor’s policies organized by the nonprofit group Picture the Homeless. “What we need is help,” he said. “I’m homeless but I am somebody. I am someone.”

“We had to do this because the mayor won’t do the right thing,” said Morales. “When elections come, people need to know that he stands for hurting homeless people.”

“No one should be treated like this,” said Parks. “Cops treat me like I’m nobody, like I’m an animal. A dog for them to kick around. That’s why I’m stepping up and participating in this legal action against the NYPD, and the administration. Why are people OK with living in a police state? I’m not, and that’s why I’m fighting back.”

Pix11 Morning News: “Do the homeless have a case in lawsuit against NYC?” [VIDEO]

Just days after Mayor de Blasio announced the city’s new HOME-STATE program to help the homeless, three homeless men filed claim against the city for harassment, after being told to move and having important items thrown away. Attorney Deborah Blum, executive director of the NYCLU, Donna Lieberman and Picture The Homeless representative William Burnett talk more about the case.

Advocates for the homeless say the city’s action is illegal, and against federal law…. but the Mayor insists his plan will give homeless a hand up, not the boot out. “We’ll have the most up-to-date and specific information on the street homeless population we have ever had,” he said, “and we’ll perform rigorous analysis of that data to determine what people need.”

The NYCLU filed a notice of claim on behalf of three homeless New Yorkers whose belongings were destroyed by police… Floyd, a member of Picture the Homeless, was sleeping in an area partially sheltered from the rain in East Harlem when he was awakened by police and told he was no longer welcome. “They came with haz-mat suits. That bag… they don’t care. They threw it right in the garbage. I said ‘let me get my stuff!’ and they said ‘you want to go to jail?'”

“Obviously, homelessness is a much more high-profile issue than it has been in a long time this year,” said Alexis Karteron of New York Civil Liberties Union. “And we think that’s why this happened, because the mayor, the police department, are under pressure to address homelessness. But at least on that day, they went about it in the wrong way.”

“Homelessness is a tragedy, not a crime,” said Donna Lieberman, executive director of the New York Civil Liberties Union, which is representing the men. “No matter how much pressure the city is under to address homelessness, all people deserve to be treated with basic humanity.”

…But that has infuriated many homeless, who protested Monday near City Hall and accused the mayor and police of destroying what little they have. “And taking all my belongings, all my property, everything I have and throwing it away in a dumpster,” Floyd Parks said. “Had it crushed up.”

But the mayor defended his plan and his actions. “It was the right thing to do,” de Blasio said. “We’re not going to allow encampments to re-assert. We’re just not going to tolerate it.”

Homeless men and women, as well as advocates, announced the legal action to be compensated during a news conference in Foley Square on Monday. The New York Civil Liberties Union and the group Picture the Homeless aided the three men in filing their claims.

Associated Press: “Outreach teams fan out in NYC as 3 homeless prepare to sue”

Jesus Morales and two others say they were sleeping in an encampment outside a school in Manhattan at about 5 a.m. on Oct. 2 when police and a sanitation crew arrived, woke them, told them they had to move and tossed their stuff, including a birth certificate and Social Security cards. Some said they were kicked and shoved by the officers.

“They grabbed my clothes and threw it all in the garbage truck,” Morales, 42, said in Spanish on Monday at a news conference, attended by about a dozen homeless New Yorkers, to announce notice of the claim. Morales said he’s been homeless nearly 16 years.

“In the single shelters, male and female, the conditions are really bad. People are afraid, people would rather take their chances on the street or riding the trains, but now Mayor de Blasio is cracking down on anyone sleeping on the trains,” Allister Williams said.

“After I finish work, I’m still on the street,” Morales said through a Spanish translator. “I have signed a piece of paper from outreach workers more than 20 times. What else do they need to know? They see me sleeping on the street every day.”

It is situations like Morales’ that make some homeless people and their advocates wary of the new HOME-STAT initiative announced by Mayor Bill de Blasio last week, which promises to put more outreach workers and police officers into Manhattan and outer borough homeless hotspots. 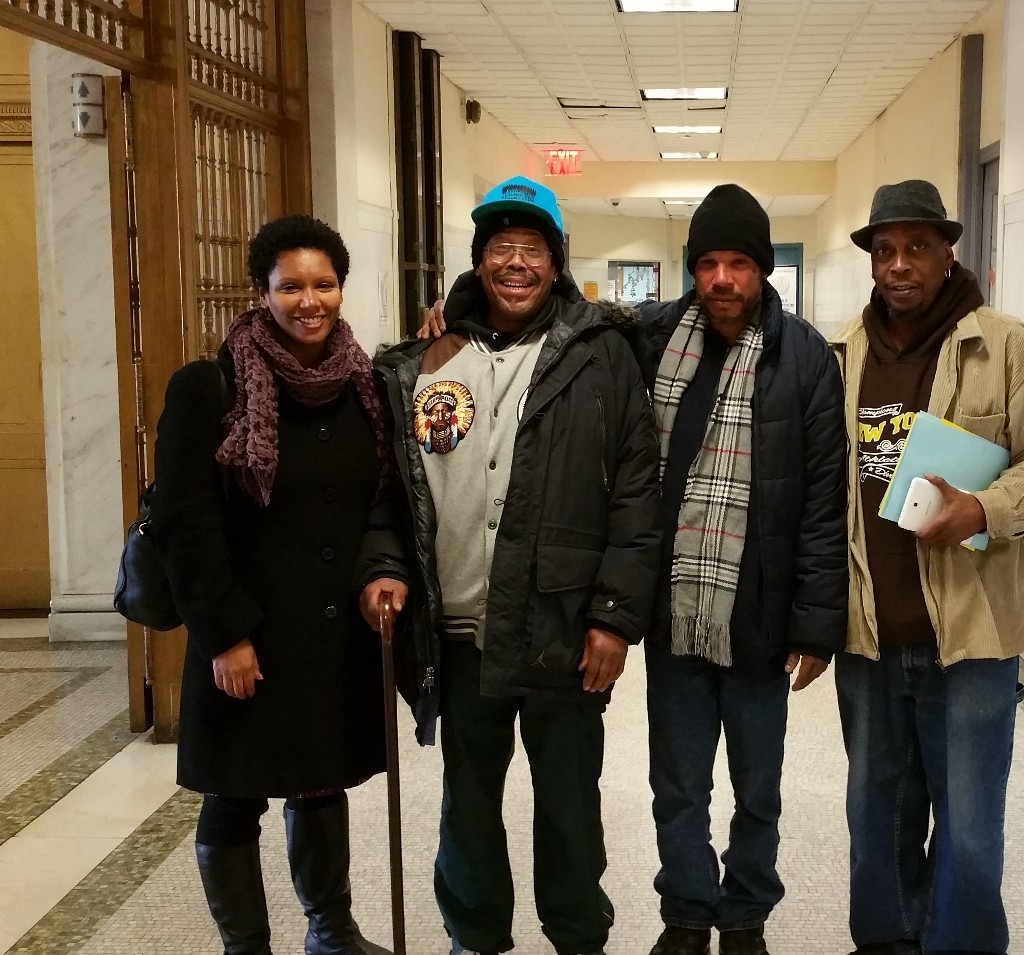