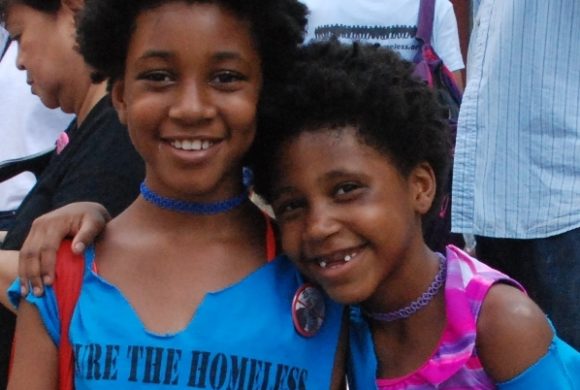 Last Saturday, we gathered on the sidewalk outside of three city-owned lots, vacant since the 1970’s, to highlight neighborhood needs, and call on the city to develop the property as deeply and permanently affordable housing.

It was a protest, but it was also a party. A cook out, as well as a community visioning session. Neighborhood residents,  homeless people, housing advocates, and other stakeholders all gathered to demand the city do something about its vacant property.

Photos of the event are available here – free to use, credit © Picture the Homeless

Check out this coverage of our protest on WBAI News!!

We’re fighting for passage of the Housing Not Warehousing Act (Intros 1034, 1036, 1039), an omnibus bill currently before the City Council that would empower the city to finally quantify vacant buildings and lots throughout the five boroughs, and to identify solutions.

And we were pleased to be joined by allies from VOCAL New York, UHAB, Partnership for the Homeless, Care for the Homeless, East Harlem Preservation, the Global Platform for the Right to the City, CASA, and the Party for Socialism and Liberation. 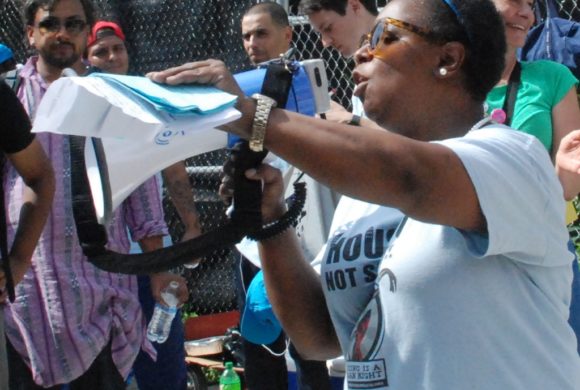 “We are failing to provide for our City’s homeless population, which has grown to levels not seen since the Great Depression nearly a hundred years ago,” said Public Advocate Letitia James. “If we utilize the City’s vacant lots and buildings, we could find housing for every homeless New Yorker. The Housing Not Warehousing Act realizes this solution by enumerating all vacant lots, creating a mandatory registry for landlords owning vacant property, and using the vacant properties to create affordable housing units.”

“It’s important that we as a community, and as a city, demand that the city take responsibility for these vacant properties, and correctly manages them,” said Al Williams, a member of Picture the Homeless. “Or, they should turn them over to communities who have a vested interest in seeing that truly affordable housing is being built. We need accountability from the city so that this lot, for example, doesn’t sit vacant for 40-45 years.”

“It is clear that our city is in a deep housing crisis, yet we still have vacant lots and empty buildings in neighborhoods across the city,” said Council Member Ydanis Rodriguez, leading co-sponsor of the Housing, Not Warehousing Act. “The truth is that the city is not keeping an up to date list of every vacant lot, which allows some to sit empty for years and sometimes even decades. The time has come to hold landlords accountable for their vacant lots and to encourage the city to begin to use their excess land for new affordable housing.”

“This community has vision,” said Marcus Moore, a member of Picture the Homeless. “Our people know what we need. We must continue to spotlight vacant property that the city and private landlords are warehousing. There are tools, to help people create real housing. Things like community land trusts. It’s a new day. Time’s up. No more warehousing.”

“Vacant city-owned lots like these represent a tremendous opportunity for our neighborhoods,” said Council Member Jumaane D. Williams, Chair of the Committee on Housing and Buildings. “Right now there’s no way for New York City communities to get a full picture of the public vacant property that’s languishing all around them. As sponsor of the Housing Not Warehousing Act, I look forward to working with my colleagues in the Council to bringing attention to this critical issue and holding hearings in the near future.”