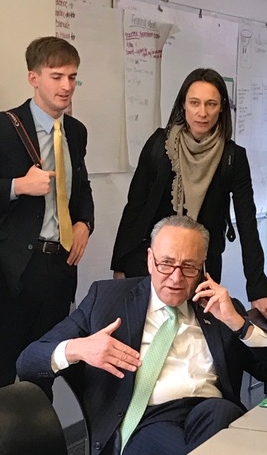 Yesterday, as part of the #NoCuts Coalition, Picture the Homeless was among the groups that met with U.S. Senator Chuck Schumer to discuss the proposed federal budget.

The short version? Things are terrible. But we can win, if we fight. And we’ll have to fight hard.

We learned that the President’s budget is even worse than we’d thought. Schumer shared lots of details about important programs that are threatened with massive cuts, or complete elimination. Section 8, CDBG, the HOME Program, Choice Neighborhoods… pretty much every one of the few programs set up to help low-income people is on the chopping block. Wealthy Republicans have been waging war on these programs for decades, and now they feel empowered to declare victory.

BUT… we also learned that we have leverage. The Democrats are prepared to fight, but we know there’s only so far they can go. Without a massive, vocal push from the masses, they have no chance of beating a Republican-controlled Congress that has the backing of the White House. We need to be in the streets. Again and again and again.

That’s why we’ll be part of tomorrow’s rally at Foley Square to fight Trump’s proposed cuts to the HUD budget.

The President wants to slash funds for such programs as Meals on Wheels and are used to clean up abandoned properties in low-income neighborhoods. Rental vouchers for homeless veterans. Housing assistance for seniors. For people with disabilities.

“Trump has opened a Pandora’s box of evil,” said PTH member Cecelia Grant. “We the people have to stand together against their agenda of separation. The government doesn’t change things. The people change things. Kennedy and Johnson didn’t do anything because they wanted to—it was the people. The people got so heated, and they didn’t want that. Only when we the people do what we did then—and maybe lose some lives—things will change.”

Please join us at the rally, and stay tuned for further updates on the work we’ll be doing to fight the right-wing agenda of hate.

Photo source: Twitter feed https://twitter.com/NY31Alcantara
“Right now, this lot belongs to the raccoons. But it should belong to us.”PTH Director Mo George is One of the #Brooklyn100!