Since 2004, members of Picture the Homeless have been fighting for community land trusts (CLTs). We believe that this model is a vital “missing piece of the puzzle” to develop and preserve community-controlled permanently-affordable housing, as well as commercial, green and cultural spaces. In 2012 we kickstarted a citywide conversation among housing advocates, nonprofit housing developers, funders, and other community stakeholders about how to get the city government to back community land trusts, a conversation that ultimately became the New York City Community Land Initiative. Last year, we co-founded the East Harlem/El Barrio Community Land Trust, in response to the rampant displacement happening as that neighborhood gentrifies.

So we were overwhelmed and proud when the city’s department of Housing Preservation & Development kicked off 2017 by issuing a “Request for Expressions of Interest” for groups interested in creating CLTs. 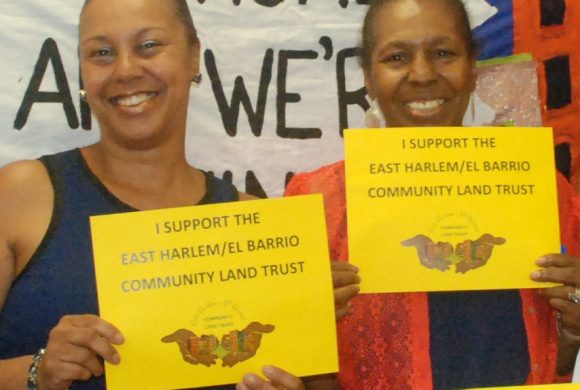 A simple RFEI might not seem like much, but this is huge. It’s the first step in returning vacant city-owned property to actual community control. It’s the administration’s first significant break with the city’s longtime practice of transferring public land into the hands of private, for-profit housing developers using time-limited affordability agreements – which creates the risk that developers may one day privatize.

As quoted in press coverage of this victory, PTH board member William S. Burnett said “After years of working together with other groups to promote CLTs as a viable and sustainable approach that can help communities stem the tide of displacement, keep low-income tenants in their homes, and create housing for homeless New Yorkers, we, at Picture the Homeless, are excited that the city is moving forward with plans to execute this model.”

“This is important because New Yorkers need extremely-low-income housing and it will save taxpayer dollars that the city is currently wasting – over a billion a year on shelters,” said PTH housing campaign leader Charmel Lucas.

Denise Ruffin, one of our tenant leaders fighting in solidarity with homeless folks to ensure that development benefits all New Yorkers, said: “My kids grew up in East Harlem.  I love my neighborhood and my block has been like my family, but now new people with higher incomes are moving in and the neighborhood is changing quickly.  I want to have the chance to stay in my neighborhood no matter how much it changes. My mother always said that all people deserve somewhere to lay their heads. Through the community land trust, we want to create housing that is truly affordable so that people in need of housing can have a place to lay their head.”

“This monumental turnaround is important to the community,” said PTH member Llima Berkley. “Faith based communities, non profits, and other entities that aren’t landlords or developers will be enabled to buy land. Land and housing can begin to include people with incomes that fall below AMI, for example, seniors, disabled, and the homeless.”