WHAT: Protest of DCAS Auction of City-Owned Property
WHEN: Wednesday, October 28th 2015, 9:30AM
WHERE: Bronx County Courthouse, 851 Grand Concourse

New York, NY – Community-based organizations and activists will rally at the Bronx County Courthouse to protest the auction of city-owned property to rich developers at a time when community-driven development and housing for homeless New Yorkers is more urgently needed than ever.

“Public property should be for the public good,” said Andres Perez of Picture the Homeless, “not sold the highest bidder. By setting an $11M minimum asking price for one of these properties, the city is signaling that they only want to deal with the kind of wealthy developers who have already proved they have no interest in building housing that benefits working-class and extremely-low-income New Yorkers.”

Activists also took issue with the “stealth” nature of the auction, with little public promotion of the event, and a lack of awareness about the sale among elected officials, city agency representatives, community residents, and non-profit organizations. 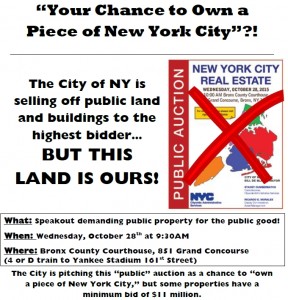 Janice Singleton, a resident of the Banana Kelly Resident Council Leader. “When is proper change going to take place for the residents of the Bronx?”

DCAS auction guidelines set no restrictions on what kinds of uses prospective purchasers can put these public assets to, and no restrictions on the types of purchasers able to participate in the auction; there is also no requirement that buyers put property to productive use or obtain a Certificate of Occupancy within any fixed timeline.

“The City is missing opportunities to stabilize neighborhoods by allowing space for the development of community assets on public land and through re-purposing public buildings.” says Paula Z. Segal, attorney and director of 596 Acres, New York City’s community land access advocacy organization. “In the property it owns, the City has both resources and leverage: City­-owned vacant land and buildings can be turned into housing that is permanently affordable; community space or gardens; or affordable commercial, cultural, retail and manufacturing space that our neighborhoods badly need. S​imply disposing of the property at auction takes this leverage away.”

Co-organized with Banana Kelly Community Improvement Association, 596 Acres, and Right to the City.