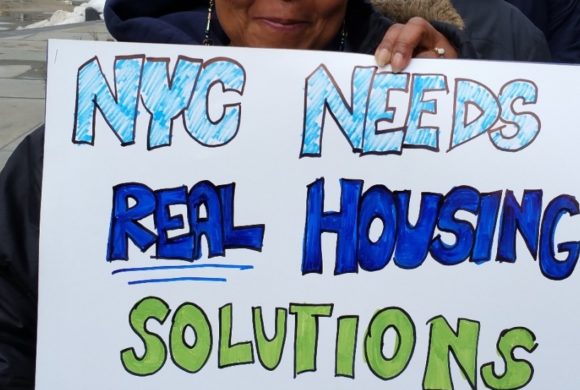 In a major victory on a fight we’ve been fighting for fourteen years, the New York City Department of Homeless Services just announced that they’re ending the LINC voucher program and replacing it with a subsidy that does not expire. LINC was the latest in a long line of doomed temporary subsidies that kept people stuck in a revolving door of homelessness.

“The city’s flawed temporary housing subsidies have led to a situation where 60,000 people are stuck in shelters, at a cost to taxpayers of $1.8 billion dollars a year,” said Monique “Mo” George, Executive Director of Picture the Homeless. “Permanent housing is cheaper than shelter. Homeless people have been demanding a better program for 14 years, and we’re elated that the city has finally heard our voice. The devil will be in the details, however, and we look forward to working with the Department of Homeless Services and the de Blasio Administration to ensure that this new voucher works for everyone.”

In 2004, when Mayor Bloomberg ended the homeless priority for Section 8 and NYCHA, and replaced them with a time-limited, five-year voucher, homeless people mobilized immediately. We traveled to Albany to lobby legislators and city officials to block funding for the temporary voucher. We conducted hundreds of surveys to capture people’s experiences. We held town hall meetings. We released a report, “Time’s Up: Homeless New Yorkers Demand Alternatives to Bloomberg’s Failed Five-Year Plan,” that highlighted the experiences of shelter residents trying to make it work with these programs. And Picture the Homeless has never stopped fighting for permanent subsidies. As recently as two weeks ago, we met with officials at the Department of Homeless Services to demand they replace the LINC voucher with a permanent one.

“The city gave us rent subsidies that were not permanent and it made people become homeless all over again,” said DeBorah Dickerson, a leader of the Housing Campaign at Picture the Homeless. “We needed universal subsidies to keep people permanently in homes. It took the city fourteen years, which is a shame, but now through this victory we can renew our hope in ending the business of homelessness and creating permanent housing for homeless and low income people.”

At the end of the day, we know that this victory is just a step in the right direction.There’s a lot of unanswered questions about this new program. And if we leave it all up to the city, that the end result won’t be what we need it to be. Members of Picture the Homeless are currently preparing for a public hearing on August 21, to ensure that the new program does not repeat the mistakes of the past, and actually helps people leave shelter – permanently.

Please stay tuned for updates, and ways that you can help us fight to help dismantle the business of homelessness.

Reportback from our #FreeToPee Campaign Launch!How they helped pass the Housing Not Warehousing Act