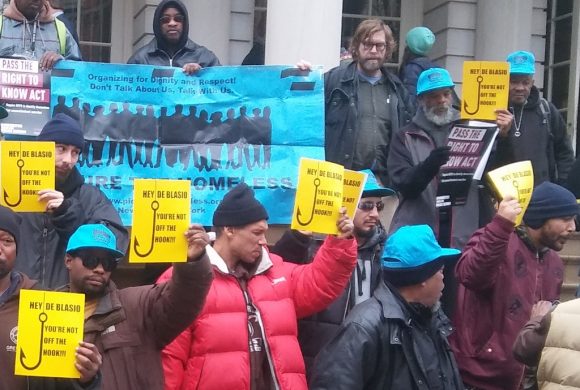 Last week, together with our legal allies at the New York Civil Liberties Union, we announced a settlement on behalf of three homeless New Yorkers who were kicked awake and whose belongings were thrown into a trash compactor by police and sanitation workers. In the settlement, New York City will provide compensation for the personal items police illegally seized and discarded, which included social security cards, birth certificates and medication.

“With this settlement, we got our foot in the door,” said claimant and PTH member Floyd Parks. “Homeless people are being abused and kicked around by the cops, and now the city is validating our experience. It’s a start. I’m grateful that they’ve paid me back for the things the cops stole from me, because I’m homeless and I need new shoes and a warm jacket, and my disability benefits aren’t enough. I believe I should have received something for the pain and suffering and disrespect I endured, but I’m happy that this settlement will let people know how we’ve been treated.”

Here are some press coverage highlights: 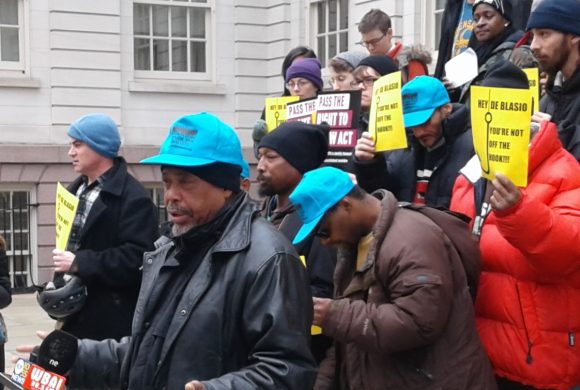 In the early hours of October 2, 2015, three homeless New Yorkers, Floyd, Timmy and Jesus were sleeping in a small area partly sheltered from the rain in East Harlem when they were kicked awake by police with flashlights and sanitation workers in white hazmat suits. The three were forced to watch as their possessions were destroyed.

“It is only fair that the city has agreed to compensate our clients for destroying what few possessions they had,” said NYCLU Staff Attorney, Jordan Wells. “Rather than having to pay out individual claims like those of our clients, the city should move away from targeting and criminalizing the homeless. This incident underscores the need for the NYPD to implement consistent policies to ensure officers treat homeless residents with professional courtesy and respect.”

This is a victory for homeless people, who see police get away with brutality and abuse against them every single day. But it’s not enough. We’ll continue our campaign against Mayor de Blasio, demanding that he act immediately to end his policy of widespread NYPD abuse and brutality against the homeless. The NYCLU filed a complaint in May of last year on our behalf, urging the New York City Commission on Human Rights to investigate the NYPD’s practice of forcing homeless people in Harlem to “move along” when they have not violated any laws but are simply present on streets, sidewalks and in other public spaces. PTH and the NYCLU contend that the NYPD’s actions violate the Community Safety Act, which prohibits “bias-based profiling,” including targeting people based on their housing status.

Stay tuned for our next steps, as we build on this crucial victory.