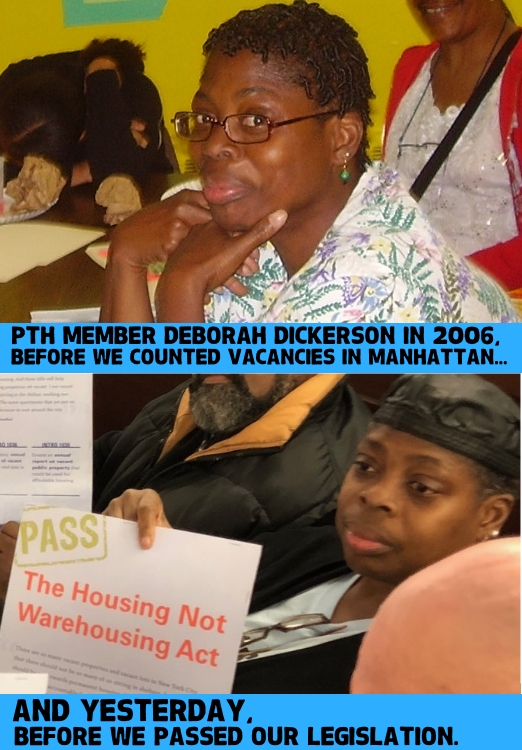 On Tuesday, December 19th, we packed the City Council chambers and cheered when the Housing Not Warehousing Act passed. It was a day our members have spent over ten years fighting for.

These are people who pounded the pavement, counting vacant property in Manhattan in 2006 and citywide in 2011 to prove how big the problem was, when city officials and even other advocates were telling us there weren’t any more vacant buildings (SPOILER ALERT: we found enough to house 199,991 households!). People who slept out on the street to raise awareness. People who were dragged out of council meetings, and unconstitutionally banned from public hearings. People who got arrested in civil disobedience protests. People who are no longer with us.

“It was a long road, it was a hard fight, but we got it,” said PTH member Darlene Bryant. “Now let’s find these vacant properties, renovate them, and get people off the street and into actual homes – because we have too many people without homes, and homes without people.”

Check out the press coverage in the Amsterdam News, City Limits, & Crain’s!

“For the first time in its history, New York City will be empowered to conduct a  census of vacant property,” said Jumaane Williams, chair of the City Council’s Housing & Buildings Committee, and the lead sponsor of Intro 1039. “The affordable housing and homelessness crisis we face presents an incredibly complex problem, and this legislation provides us with essential tools toward creating solutions. As someone who participated in the count that took place on the ground over a decade ago, I know how important this tool will be. Finally, we’ll be able to understand the extent of property warehousing throughout the five boroughs, and craft real policy solutions that create housing for all New Yorkers, especially those who are currently without homes.”

Members of Picture the Homeless have been fighting for these bills across multiple legislative cycles, going back to 2007. 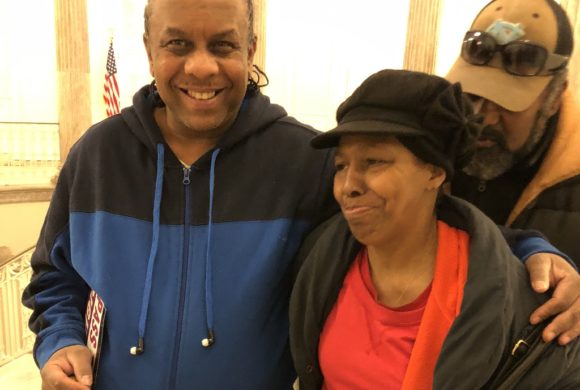 “Today marks a turning point in the fight for housing for homeless folks,” said PTH executive director Monique “Mo” George. “This is the first step toward holding landlords accountable, especially in areas of heavy gentrification. To me, there’s nothing more powerful than the people who walk into our office, work their asses off for years, and then go out to sleep on the sidewalk or in the shelters. Nobody understands what it means to be an activist and then go out and sleep in the freezing cold, and still come back day after day. That’s strength beyond measure. That’s what passed these bills.”

“This day has been a long time coming,” said Jose Rodriguez, a member of Picture the Homeless. “Passing the Housing Not Warehousing Act is the first step in identifying potential housing in every community in our city. For the first time, city residents will know what vacant properties are available to support community-based projects, including badly-needed housing for extremely-low-income New Yorkers.”

“Maybe we made a lot of mistakes along the way,” said PTH member Andres Perez. “But we kicked a lot of ass too. I’m still stunned that this finally happened. It’s a beautiful moment.”