Last week, we supported homeless people stuck in conditions so bad that a report from the Department of Investigation called the building “unacceptable… filthy, badly maintained and with garbage in the common areas.” We held a rambunctious protest at the site, and then marched to the offices of the agency that operates the shelter units.

This week? The open violations in the building have gone from 125 to 80!!

We’ve still got a long way to go. This is just one of hundreds of horrific buildings, where countless thousands of homeless people are in unsafe and dangerous conditions – stuck there indefinitely because the city would rather spend $3,000 a month to shelter them than $1,500 to provide actual housing. But you can trust and believe that we’ll be stepping up the pressure this summer, with more protests, more press work, more spotlighting bad situations and getting them fixed.

Huge thanks to this excellent article in Gothamist and this great one in DNAinfo, both of which helped put additional pressure on the management to fix these problems.

Perspectives from members of Picture the Homeless:

“I feel that we brought this to the system’s attention, and that is what needs to be done. Aguila is misusing City money on their tenants and in their shelters. But honestly, I feel like HPD stepped in there and made something happen, and I’m glad HPD took initiative and recourse to have these violations corrected. Picture the Homeless was part of bringing these violations down, and making our voices heard. We helped clean up this environment for the children and for the shelter residents.” – Darlene Bryant

“It’s very important that we know that our message has been put out to Aguila. But it still, needs more improvement and we want to see NO violations and permanent housing for these shelter residents. Even though Aguila has taken to removing some of these violations, we would still like to meet with Aguila and the City to see how we can convert these shelters back into permanent housing. Due to the hard work of Picture the Homeless members and allies, we are very grateful that we were able to get our message across to Aguila, the residents, and the City. We will continue to fight and keep moving until we finally get permanent housing in the end.” – Andres Perez

“They’re taking us seriously but they still have more work to do. If we keep on pushing there will be less violations. When we came, they knew we meant business. Now Aguila knows that if they don’t do what they’re supposed to do, we are going to come back stronger.” – Pedro Cabrera 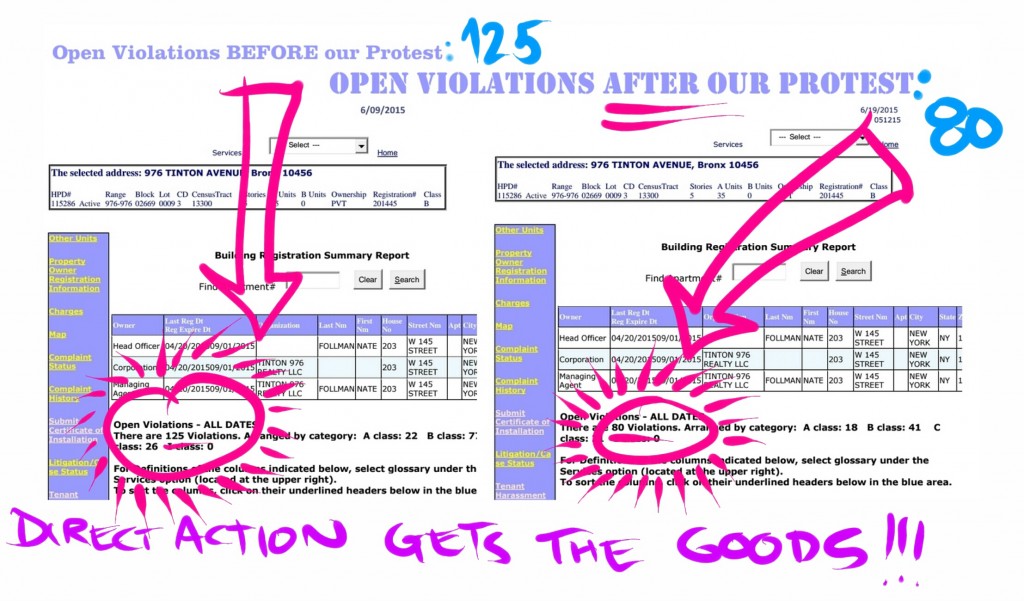